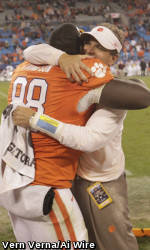 Here are some of the highlights from Day Two on the practice fields as the Tiger football team prepares to face West Virginia in the Discover Orange Bowl on Wednesday, January 4.

CLEMSON, SC – With a new contract signed earlier this week and his future at Clemson firmly secured, Offensive Coordinator Chad Morris’ number one goal as practice for the Discover Orange Bowl began was to whip his players into shape.

And boy has he done that.

For the second straight day, Clemson spent a good portion of Wednesday’s practice getting back in shape as they prepare for 23rd-ranked West Virginia on Jan. 4 at Sun Life Stadium in Miami, FL.

“After a week off, you can tell their conditioning isn’t quite where it needed to be so the last couple of days we kind of spent a lot of time doing some running, and that’s good,” Morris said. “They need that right now.”

The Tigers will also need their running game to be in full throttle as they game plan for a West Virginia defense that ranks 15th nationally against the pass. The Mountaineers are yielding just 199 passing yards a game in their 3-3-5 scheme.

“We have to have them all ready to go,” Morris said. “I think Tajh (Boyd) has to become a part of that. You saw that in the championship game. Tajh ran the ball more effective than he had in the previous four weeks.

“When we were clicking earlier in the year, Tajh was pulling the ball down on third-and-14 and picking up 15 yards. That’s something he had gotten away from. We really challenged him last week to run the football. For this offense to roll and for it to be able to click, we have to run the football effectively.”

Clemson (10-3) rushed for 217 yards against Virginia Tech, which played a major role in why the Tigers amassed 457 total yards. Running back Andre Ellington led the way with 125 yards, including a 29-yard touchdown run in the third quarter.

The Hokies were giving up only 98 yards a game on the ground prior to the championship game.

“Coach Swinney really stressed that week about going back to our basics and throwing out things that do not work. If they do not work don’t use it. That went for both sides of the ball and special teams. We dialed back in and did our base stuff. Getting guys healthy was a key too, but those are some things we have to focus on the next 15 or 16 practices.”

Besides getting ready for West Virginia, Clemson is also spending time with its young players during these first few bowl practices. Head Coach Dabo Swinney likes to call these workouts “junior varsity practice” as red-shirted players get more one-on-one instruction from coaches than they do during weeks when they are a part of the scout team.

With three starters and two backups along the offensive line graduation after the Orange Bowl, these next few weeks will be key for the young offensive linemen.

“Coach Swinney does a good job setting up sometime for our younger kids to get some good reps, and that is something we focused on. They have got a lot of good reps this year in practice, but these guys have to come on. They need to use these extra 15 practices plus the practices we had for the championship game and use them as another spring.

“We are almost going to get two full springs out of them (the two postseason games). They need to understand the importance of coming on and getting developed. It’s a huge concern and we have to get these guys going.”