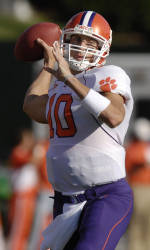 Clemson, SC – In December, Clemson quarterback Cullen Harper and safety Michael Hamlin were named permanent captains of the Clemson football team. On Saturday they were honored as the offensive and defensive most valuable players for the 2007 season. Those were just two of the awards presented Saturday night at the football’s 2007 team banquet at the Madren Center.

Harper was named the offensive MVP after establishing 22 school records last year. He threw 27 touchdown passes to establish a school record and completed 65 percent of his passes for 2991 yards. He led the ACC in passing efficiency, just the fourth quarterback in Clemson history to lead the ACC in passing. Hamlin was second on the team in tackles with 97 and led the team in turnovers forced with six. He was a big reason Clemson ranked in the top 10 in the nation in scoring defense and total defense.

C.J. Spiller was named the special teams MVP for 2007. Spiller finished the year 14th in the nation in kickoff returns with a 29-yard average. He became the first player in Clemson history to return a kickoff for a touchdown in consecutive games when he scored against Duke and Wake Forest. He became just the second Clemson player in history to return two kickoffs for touchdowns in the same season. Spiller led the Tigers in all-purpose yardage with 132.5 yards per game. He was named the offensive MVP of the Chick-fil-A Bowl. He had an 83-yard touchdown run in that game, the longest play of any kind in Clemson bowl game history.

Harper and Hamlin are juniors, while Spiller is a sophomore. All three will return next year to lead the Clemson team. The Tigers return 16 starters for next year, plus Spiller who was technically not a starter in 2007.