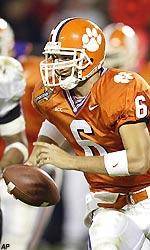 ORLANDO, Fla. – A monthlong layoff and an ankle injury did little to slow down Kliff Kingsbury.

Kingsbury became the third Division I-A player to top 5,000 yards passing in a season, throwing for 375 and three touchdowns as Texas Tech defeated Clemson 55-15 in the Tangerine Bowl on Monday night.

Five different receivers caught touchdown passes for the Red Raiders, and Wes Welker had a 59-yard punt return for a score.

“I’m totally embarrassed,” defensive tackle Nick Eason said. “This was my last game as a Clemson Tiger, and I got destroyed. I might have more games, in the NFL, maybe some All-Star games, but this is one I’ll always remember.”

Kingsbury left briefly in the third quarter after Clemson defensive end Khaleed Vaughn appeared to roll onto his right leg. Kingsbury quickly got up, but he hopped only a few yards before falling to the turf and motioning to the training staff. He got his ankle re-taped and jogged on the sideline without a limp, and he returned on the next possession after approval from the trainer.

“He wasn’t keeping me off the field,” Kingsbury said. “I was going to get back out there.”

The Red Raiders were playing for the first time since a 60-15 loss to Oklahoma on Nov. 23, but they went ahead 3-0 lead after taking their opening possession 82 yards in 13 plays. It was 24-0 in the second quarter before the Tigers blocked a punt out of the end zone for a safety and their first points.

Kingsbury was intercepted once on a poorly thrown pass in the first quarter, but he had little problems solving Clemson’s coverage.

He left midway through the fourth quarter but returned for the final play with 4 seconds left, taking a knee to end the game.

Texas Tech punted just three times – including the block – and piled up 555 yards of offense.

“We went out there and really played with a good tempo, and I think that everybody fed off one another,” Leach said. “I’m proud of the way we came down here and stuck to business.”

Charlie Whitehurst, a redshirt freshman who led the Tigers to victories in three of their last four games after taking over as the starting quarterback, couldn’t match Kingsbury. He finished 20-of-48 for 263 yards and four interceptions after being intercepted only twice in 166 attempts coming into the game.

Most of Whitehurst’s problems were caused by a lack of protection by his offensive line. Even when he avoided a sack he often got hit. He left with 2:10 to go after taking a hard hit from linebacker Geremy Woods, although Whitehurst walked off the field on his own.

“I honestly felt sorry for Whitehurst,” Texas Tech defensive end Aaron Hunt said. “We hit him shot after shot after shot. Just like any other freshman, when you hit him, he gets rattled and starts running around and doing crazy things.”

His receivers let him down, too, dropping at least five passes. Late in the first half, with Clemson driving, Whitehurst threw a perfect pass to Airese Currie at the goal line. But the ball bounced off Currie’s shoulder pads and landed in the hands of Texas Tech safety Vincent Meeks with 31 seconds left.

After Meeks returned it 23 yards, three quick passes by Kingsbury moved the ball into field goal range. Robert Treece kicked a 40-yarder on the last play of the half for a 34-2 lead.

“The score’s pretty embarrassing,” Clemson coach Tommy Bowden said. “Games that come down to the end of the fourth quarter, those are a little easier to take.”

The game was sponsored by Mazda.