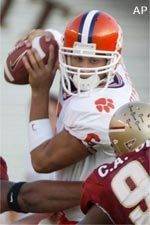 TALLAHASSEE, Fla. (AP) – Wyatt Sexton threw for 162 yards and a touchdown after replacing an injured Chris Rix, and No. 8 Florida State forced five turnovers in a 41-22 victory over Clemson on Saturday.

Rix sprained his right ankle late in the first quarter and was able to return, but spent the rest of the game on the sideline watching Sexton direct the offense.

Sexton, a redshirt sophomore, completed 17 of 26 passes with a 47-yard scoring pass to Chauncey Stovall – the Seminoles’ first TD pass of the season.

It was also elder Bowden’s 344th career victory, the most ever by a Division I-A coach.

The Tigers managed only 173 yards offense, just 23 in the second half.

The Seminoles’ defense, ranked ninth nationally going into the game, intercepted Charlie Whitehurst three times and forced two fumbles. The defense scored one touchdown and set up another just 18 seconds apart in the second quarter.

The Seminoles took the lead 10-7 on B.J. Dean’s 1-yard TD run, three plays after Charles Howard recovered a fumble by Whitehurst at the 18.

Whitehurst, on Clemson’s next offensive play, was intercepted by Leroy Smith, who ran in 31 yards right past the quarterback to give the Seminoles a 17-7 lead.

This time Clemson countered as Curtis Baham – wide open in the end zone – pulled in a 12-yard TD from Whitehurst to make it 17-14 with 1:47 left in the half.

Miller’s two TDs covered 97 and 86 yards and he set an ACC record with 282 yards on six returns. His second touchdown brought Clemson to within 24-22 midway through the third period.

Whitehurst, who has struggled all season, completed 10 of 24 passes for just 88 yards and lost two fumbles. He has 13 turnovers in Clemson’s first four games, including 10 interceptions.