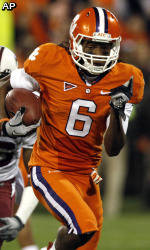 CLEMSON, S.C. (AP) – Stephen Garcia threw for two touchdowns, Alshon Jeffery had his seventh 100-yard receiving game and No. 18 South Carolina posted its third nine-win season ever with a 29-7 victory over rival Clemson on Saturday.

The Gamecocks (9-3) have only won nine games twice before in 117 seasons of football, going 10-2 in 1984 and 9-3 in 2001. And their passing game, led by Garcia and star wideout Jeffery, gave Auburn’s secondary something to worry about with next week’s SEC championship coming up.

Jeffery had four catches for 126 yards by halftime, including a 37-yard touchdown throw from Garcia.

Clemson (6-6) was held scoreless for the game’s final 58 minutes.

South Carolina’s already had a landmark season with its first-ever win at Florida and its first divisional crown. Adding a victory at Clemson was a satisfying way for the Gamecocks to head into the Georgia Dome for next week’s SEC title game.

A year ago, it was Clemson with bigger things down the road as it brought its ACC Atlantic title into the season-ending rivalry. The Tigers, though, fell in that contest 34-17.

Clemson fans filled sold-out Death Valley on Saturday, hoping the same might happen to the Gamecocks. Instead, Jeffery and South Carolina proved quickly they were focused on this game.

Trailing 7-3, the Gamecocks’ Brian Maddox pounced on a ball that got away from Clemson’s punter Dawson Zimmerman. Garcia threw a simple screen to fullback Patrick DiMarco on the next play to put the Gamecocks ahead for good.

Jeffery struck for catches of 39 and 37 yards, the last a post route for a touchdown. It was the first time in seven games Clemson’s defense had surrendered two TDs in a game.

South Carolina and Jeffery weren’t through. He added a 33-yard catch a series later that ended with Lanning’s second field goal.

He finished with five catches for 141 yards.

Clemson, meanwhile, suffered through the offensive problems that have plagued it the past month.

Freshman DeAndre Hopkins ignited the crowd just minutes into the game as he got behind South Carolina’s secondary for a 45-yard TD, giving Clemson an early lead.

The Tigers managed just 39 yards of offense the rest of the half, though. Coach Dabo Swinney even brought in injured Andre Ellington, the team’s leading rusher who’s been out since Oct. 30 with foot problems, for a spell. But he didn’t gain any ground, either.

It was a tough end for Kyle Parker, Clemson’s two-sport star who gave up $800,000 in additional money from the Colorado Rockies to play one last season for the Tigers.

Just a sophomore, he had a solo run down Death Valley’s hill on Senior Night because he previously announced he wouldn’t return.