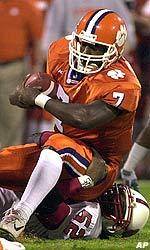 CLEMSON, S.C. – Now that North Carolina State has achieved the best start in school history, the Wolfpack are trying hard not to think about where this special season might lead them.

“We can’t afford to look at the big picture and look past people. That’s how you get beat,” said safety Terrence Holt, who had a fumble, an interception and returned a blocked punt for a touchdown in No. 12 N.C. State’s 38-6 victory over Clemson on Thursday night.

The Wolfpack not only improved to 9-0 (4-0 ACC), they firmly established themselves as a team to be taken seriously in the Bowl Championship Series race.

“We’ll let everybody else analyze all that BCS talk, about us being 9-0 and about us being the first team at N.C. State to do that,” Holt added. “We can’t worry about that.”

Freshman T.A. McLendon ran for a career-high 178 yards and two touchdowns for the Wolfpack, who are tied with Florida State for first place in the conference. Philip Rivers, the nation’s highest rated passer, also ran for a touchdown, and the team’s defense held Clemson (4-4, 2-3) to a season-low point total.

With wins over Division I-AA East Tennessee and Massachusetts, N.C. State was one of the most overlooked unbeatens in the country. Surely, the thinking went, the Wolfpack would crack in prime time at Death Valley, where they had lost eight of their last 11 games.

But the Pack were more than ready for the spotlight.

“All I know is, we’re one of eight football teams that are undefeated at this juncture of the season,” said N.C. State coach Chuck Amato, a linebacker on the 1967 team that opened 8-0. “And that’s not easy to do.”

Amato’s club team has chance to accomplish what the Wolfpack couldn’t during his senior year – win a conference title and challenge for a national championship.

It won’t be easy. N.C. State closes with Georgia Tech, Virginia, Maryland and the Seminoles. But the Wolfpack have exceeded expectations all year long.

Lamont Reid returned the opening kickoff 56 yards before many of the 74,000 fans had even taken their seats. And while that drive fizzled when Adam Kiker’s 32-yard field-goal try thumped the left upright, it was about the only thing that didn’t go according to plan for N.C. State.

Manny Lawson blocked a first-quarter punt – the Wolfpack’s seventh blocked kick this year – and Holt scooped it up for his TD.

On N.C. State’s next drive, McLendon got the call on fourth-and-1 and went untouched through the left side of Clemson’s stacked-up line for a 31-yard score.

Clemson tried to rally in third quarter, driving to the Wolfpack 17 on its first possession. But with 1 yard to go for a first down, the Tigers were stuffed for no gain on runs by Yusef Kelly and then Simmons.

McLendon followed that with a 65-yard gain as the Pack regained momentum. Kiker finished the drive with a 26-yard field goal.

McLendon added a 4-yard TD run – his 14th of the season – in the fourth quarter, and Jerricho Cotchery took an onside kick 42 yards for the Wolfpack’s final TD.

When the game ended, Wolfpack fans rushed the field, waved signs and chanted “Nine and oh, nine and oh,” on the Tiger Paw at midfield. Rivers said winning at Clemson proved the Wolfpack could compete with anyone.

“To me, that was the biggest thing we accomplished tonight,” he said.

Simmons had two fumbles and an interception. When he was pulled in the second quarter, backup Charlie Whitehurst threw an interception on his second play.

Even when the Tigers scored, it was comical. Justin Miller, who went 80 yards for the touchdown.

“I didn’t have my team ready to play,” Clemson coach Tommy Bowden said. “They had their team ready and I didn’t.”

The Tigers had talked all week of reviving their season against a North Carolina State team that hadn’t played anyone of Clemson’s caliber. Instead, the Tigers served up their worst home loss since falling 35-3 to North Carolina last year.

The Wolfpack gave up only three first downs and 68 yards in the opening half. It was the first time Clemson had been held scoreless before the break since a 17-7 Peach Bowl loss to Mississippi State in 1999.