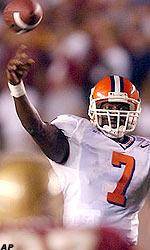 “I had to win the stinking game and I had to whip him to do it,” Bowden said after No. 11 Florida State beat son Tommy’s Clemson Tigers 48-31. “It’s not fun when you whip your son. (But) I didn’t tell him to get into coaching.”

The 72-year-old Bowden has won 328 games, including four straight over his 48-year-old son. The 328 wins are two fewer than all time-leader Joe Paterno of Penn State.

The Seminoles (5-1, 4-0 Atlantic Coast Conference) showed little confidence in their passing game and benched sophomore quarterback Chris Rix for most of the second quarter, capitalizing on four Clemson turnovers and a punishing ground game for the victory.

And their schedule gets tougher with No. 1 Miami next on Oct. 12.

“From what I see, it’s Miami and the rest of the world,” Bowden said. “We’re not at that level yet.”

But he was glad to bounce back from last week’s 26-20 defeat at Louisville.

“Clemson is playing with a lot of confidence and enthusiasm,” Bobby Bowden said. “They scared us.”

Greg Jones ran for three touchdowns, breaking eight tackles on the final one, and set up a fourth with a long run that helped the Seminoles take a 28-24 halftime lead.

“I was just wanted to play good against the home team,” said Jones, who is from South Carolina and visited many of his former high school acquaintances in the Clemson locker room after the game.

“I don’t know how many tackles I broke,” Jones said. “I was just trying to make it look good.”

The Seminoles took advantage of poor special teams play by Clemson (3-2, 1-1) to take the lead at halftime. They took control behind Jones and a punishing running game in the second half.

Jones, who gained 160 yards last year at Clemson, finished with 165 yards on 22 carries to give the Seminoles their 11th straight win over Clemson since they joined the ACC in 1992.

Jones, a 240-pound junior, scored on runs of 20, 1 and 21 yards. His second TD gave Florida State a 35-24 lead midway through the third quarter. He ripped through virtually the entire Clemson team on his final TD which sealed the Florida State victory.

Clemson dominated the first half statistically, but trailed.

Rix rifled a 5-yard touchdown pass to Talman Gardner to give Florida State the halftime lead with only 6 seconds left in a wild 30 minutes highlighted by an onside kick, a kickoff return for a touchdown and a pass play off a fake double reverse that led to a Clemson field goal.

Although the Seminoles had the ball for only a little more than four minutes in the second quarter, they scored 21 points.

Clemson dominated the half, amassing 341 yards while Florida State stumbled on offense, using backup quarterback Adrian McPherson for most of the second quarter.

“We couldn’t get it done in the end,” said Simmons, who was 17-of-27 for 293 yards and two touchdowns, but was intercepted twice.

Clemson guard Nick Black was taken out on a stretcher after he broke his right leg in the first half.

Florida State called off classes for Thursday and Friday, anticipating campus traffic problems because of the weeknight game. Fans would be coming into the stadium just as state workers would be leaving their jobs only a few blocks away.

School officials claimed the early “fall break” has been in the works for several years and this was a good opportunity to get it started.