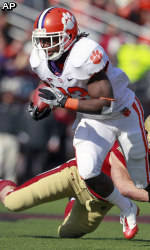 BOSTON (AP)–Chase Rettig threw a 36-yard touchdown pass to Montel Harris, Nate Freese made a pair of field goals and Boston College stopped a five-game losing streak by holding off Clemson for a 16-10 victory on Saturday.

It was the Eagles’ longest losing streak since 1998.

Harris ran 36 times for 142 yards for the Eagles (3-5, 1-4 Atlantic Coast Conference). Rettig completed 9 of 16 passes for 136 yards after throwing an interception for a score on the third play of the game.

Clemson running back Kyle Parker was 21 for 39 for 176 with two interceptions, both in the final quarter.

Boston College, which trailed 7-0 after the third play of the game, led 16-10 at halftime.

The Eagles had a pair of close losses the previous two weeks, losing by three to Maryland and 24-19 at No. 16 Florida State.

The Tigers had a pair of good scoring chances they wasted in the second half.

After Catanzaro missed his second field goal attempt of the game–a 36-yarder–midway into the third quarter, the Tigers moved right back into BC territory the next time they got the ball after stopping the Eagles on a three-and-out.

With a third-and-16 at BC’s 19 early in the fourth, Parker rolled right before lofting a desperation pass crossfield that was intercepted by corner back Donnie Fletcher.

Clemson moved into BC territory again midway in the fourth, but linebacker Luke Kuechley tackled tight end Dwayne Allen a yard short after he made a catch at the Eagles’ 32 on a fourth-and-7 play.

Kuechley sealed it by intercepting Parker at the Eagles’ 45 with 1:42 to play.

Trailing 10-3, the Eagles took advantage of a poorly timed roughing the passer penalty and a fumbled kickoff to score on consecutive possessions.

With a third-and-26 at the Tigers’ 39, Clemson linebacker Corico Hawkins was flagged for roughing Rettig on a short pass completion, giving BC a first down at the 24. The drive stalled, but Freese kicked his first 36-yard field goal, cutting it to 10-6.

BC’s Steele Divitto recovered a fumble at the Tigers’ 36 on the ensuing kickoff after Jamie Harper bobbled a bouncing kick. On the next play, Rettig hit a wide open Harris along the left sideline and he raced in for a score, diving in from the 1 just before being knocked out of bounds to make it 13-10.

Freese booted a 36-yard field goal as time expired in the first half to increase the Eagles’ lead to 16-10.

Rashard Hall had intercepted Rettig along the left sideline at Clemson’s 48 and raced untouched for a score 3:01 into the game, moving the Tigers ahead 7-0.

BC responded on the ensuing drive, going 70 yards in nine plays before being stopped inside the 5 three times. Freese kicked a 21-yard field goal to make it 7-3. The big play of the drive was a 40-yard pass from Rettig to Ifeanyi Momah, who leaped in front corner back Marcus Gilchrist at the 2-yard line.