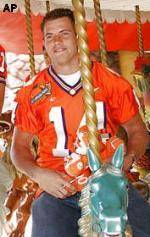 “One of the most artificial things in all of sports is Division I bowls,” Leach said.

The Red Raiders (8-5) have a slightly more dismal mark in the postseason; they’re 0-4 since beating Air Force in the 1995 Copper Bowl. They get a chance to snap that streak Monday night against Clemson (7-5) in the Tangerine Bowl.

“In every other team sport, every other level of football, you go through a season and you might have a week off and then play the next week,” Leach said. “But in the case of bowls you’re off a month or two before you play again.

“So staying sharp and staying focused with a tremendous lapse presents a different set of challenges.”

The Tigers overcame their own challenges last year in the Humanitarian Bowl in Boise, Idaho, beating Louisiana Tech despite a driving snowstorm during the first three quarters.

“We’re Southern boys,” Clemson center Tommy Sharpe said. “We don’t like to go up in the cold.”

That won’t have that problem this year. The forecast in Orlando calls for sun and temperatures in the 70s.

Wide receiver Jackie Robinson, Sharpe’s teammate, didn’t want to be anywhere else. Before the Tigers beat South Carolina 27-20 on Nov. 23 to end the regular season, Robinson explained to his teammates that they would go to either the Tangerine Bowl or the new Continental Tire Bowl in Charlotte, N.C.

Robinson said the difference between the two games was like sitting poolside on a warm day versus changing a flat tire on a cold December morning. When he found out Clemson was heading to Orlando, he was ecstatic.

“As soon as I got the news, I got on my phone and started calling all the players’ numbers that I had,” he said. “I was extremely happy, and they felt the same way.”

Robinson can afford to feel that way, since he won’t have to try to stop Red Raiders quarterback Kliff Kingsbury.

It’s a system Leach developed from watching other teams over the years, ranging from the Green Bay Packers to Valdosta High School in southern Georgia, when he was an assistant at nearby Division II Valdosta State.

“It’s like most offenses; it’s all been borrowed from other places,” Leach said. There’s not a lot of original things in football. There’s just old ideas that are packaged.”

Still, the scheme was good enough for Texas Tech to upset then-No. 4 Texas 42-38 on Nov. 16. Kingsbury threw for 473 yards and six touchdowns, and he probably will need another big game to give the Red Raiders their first bowl victory in seven years.

Clemson won three of its last four games after switching quarterbacks, as redshirt freshman Charlie Whitehurst replaced junior Willie Simmons. Whitehurst completed 63 percent of his passes in those four games, throwing eight touchdown passes and one interception. He also ran for a TD.

“Charlie’s done a phenomenal job,” Sharpe said. “He’s just a football player. He’s tough, he doesn’t care. He’ll stay in the pocket even if somebody is about to blow him up.

“As an offensive lineman, you look back there, and you like playing for a guy who knows he’s going to get punched in the face but doesn’t care.”

Whitehurst’s development has been helped by learning from his father, David, who was a quarterback for the Green Bay Packers from 1977-83.

“The success he’s had as a freshman after only four starts at the end of the year is really a credit to his father,” Clemson coach Tommy Bowden said. “We just haven’t had time to mess him up yet.”