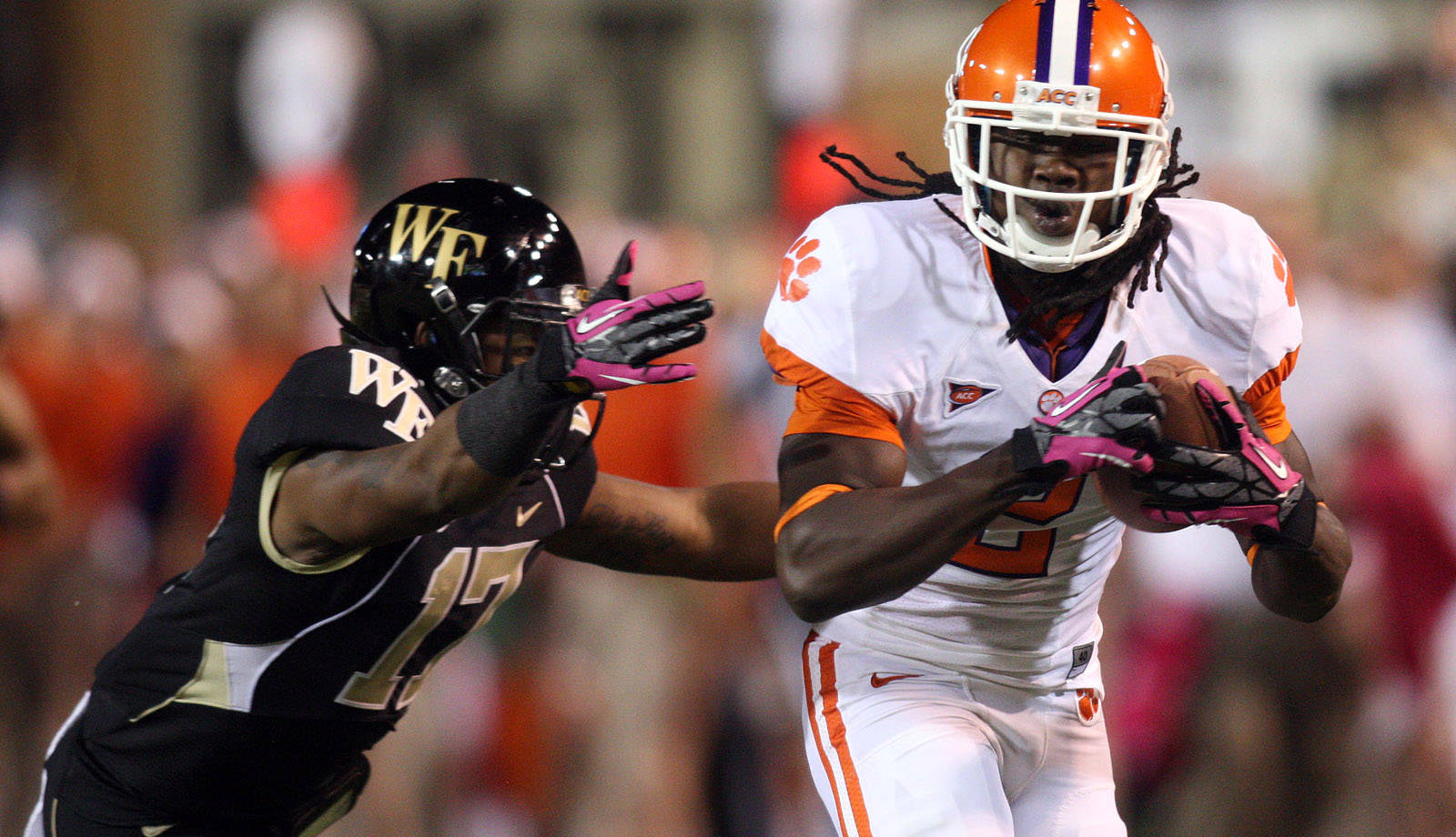 WINSTON-SALEM, NC – Dabo Swinney is regularly quick to debunk what he calls “voodoo,” the strange phenomenon that leads to things such as Clemson being 1-9 all-time in ESPN Thursday night games.

It appears the Tigers’ head coach has turned his team into staunch nonbelievers, too.

“Thursday night is just Thursday night to us,” senior safety Jonathan Meeks said in the aftermath of the Tigers’ 42-13 win over Wake Forest at BB&T Field.

Clemson emphatically exorcised those demons on this particular Thursday night, as quarterback Tajh Boyd threw for a school-record 428 yards and five touchdowns – all in the first half – in the rout of the Deacons, the Tigers’ fourth straight victory in the series.

“Everybody has been reminding me all week that Clemson is 1-9 in Thursday night games,” Swinney said after the Tigers improved that mark to 2-9. “So maybe we can start a new tradition now of winning those games.”

The night also served as a coming-out party of sorts for All-American wide receiver Sammy Watkins this season, as the sophomore became the first player in Clemson history to reach 200 receiving yards in a game. He finished with eight catches for 202 yards, eclipsing the century mark for the first time this season and topping his previous career high of 155 yards prior to halftime with 177 yards before the break.

“I just played within the system and got open and got great balls from Tajh,” he said. “I’m just getting back in the groove, and I think next week it should carry on as well.”

After quick punts on its first two possessions, the Clemson offense finally got rolling on its third. On a second-down play, Boyd found a wide-open Watkins on a 57-yard bomb down the sideline to set the Tigers up at the Wake 10. Three plays later, Boyd found Brandon Ford in the flat for a nine-yard touchdown and a 7-0 lead.

On the first play of the second quarter, Boyd and Watkins hooked up for another big play, this time a 61-yard touchdown pass, as Watkins ran a deep out route, outran a pair of defenders and tiptoed down the sideline to put the Tigers up 14-0 with 14:49 to go in the half. The catch gave Watkins 123 receiving yards on the night, eclipsing his previous high for this season – 86 yards against Virginia Tech last week – just one play into the second quarter.

“Coach Morris called the plays aggressive this week, and I played aggressive, and we just came out and executed all the plays he called,” Watkins said.

After Tig Willard helped force a Wake Forest punt with a third-down sack, Clemson added to its lead in short order, going 80 yards on seven plays and finding the end zone on an 11-yard touchdown pass across the middle from Boyd to Sam Cooper.

The Tigers added to the lead, and Boyd to his touchdown pass tally, on their next possession, as DeAndre Hopkins caught a 12-yard scoring strike to cap off a six-play, 68-yard scoring drive that put Clemson up 28-0.

The Tigers got the ball right back, as Josh Watson recovered a Wake Forest fumble, caused by Cortez Davis, on the Deacons’ 19. Four plays later, Boyd threw his fifth touchdown pass of the first half to a fifth different receiver, this time a two-yard fade route to Charone Peake.

“Charone has been awesome since last spring and has had a heck of a year,” Swinney said. “It was really good to see that from him. We gave him the opportunity there, and it was a really well-executed route by Charone.”

Wake Forest got on the board with 12 seconds left in the first half, as Tanner Price hit Tommy Bohanon for an eight-yard touchdown to make the score 35-7.

Price and Bohanon hooked up again to open the second-half scoring for an 18-yard touchdown with 7:45 to go in the third quarter that trimmed the deficit to 35-13.

D.J. Howard stretched the Tigers’ lead back out to 42-13 with a one-yard touchdown that capped a 13-play, 86-yard drive that took 5:02 off the clock and provided the final margin.

Clemson’s good work was not limited solely to its offense on the night. The defense also turned in perhaps its best performance of the season, as it recorded a season-high five sacks – the most since it had six in the 2010 opener against North Texas – and held an opponent to fewer than 300 yards of offense (290) for the first time since it held Boston College to 258 last season.

Boyd stayed in the game just long enough to surpass Charlie Whitehurst’s record of 420 passing yards, set against Duke in 2002. The record-breaker came on a 37-yard pass to Martavis Bryant midway through the fourth quarter.

“I wasn’t really going for the record,” he said. “I’m not going to lie, I kind of wanted to go for 400. To break the record kind of topped it off, but the major part about it is we won – and that’s all we really worry about.”