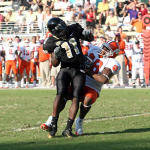 The comeback wasn’t sealed until the final play, when Tigers wide receiver Curt Baham was stopped at the 3-yard line after a 27-yard gain just as time expired. The referees huddled briefly before agreeing that it was over, setting off a raucous celebration by the Demon Deacons (2-3, 1-1 Atlantic Coast Conference).

They drove 66 yards in slightly less than 2 minutes for the winning score after Clemson coach Tommy Bowden called for a fake field goal instead of letting Jad Dean attempt a 44-yarder that would have put the Tigers up by six. The poorly executed play was stopped easily, and Wake Forest took over on its 34.

Randolph, who replaced Ben Mauk at quarterback this week as part of a shake-up by coach Jim Grobe, was 5-for-6 on the final drive and finished 20-for-25 for 222 yards. He threw for a total of three TDs.

The loss was the third in a row for Clemson (2-3, 1-3), but at least this one didn’t go into overtime. After winning their opening two games by a total of five points, the Tigers lost in triple overtime to Miami and in one extra period to Boston College.

Charlie Whitehurst bounced back from a rough start to go 28-for-42 for 304 yards for the Tigers, and James Davis ran for his first two touchdowns of the season. They rallied from a 21-7 deficit to take a a 27-21 lead on Dean’s 47-yard field goal late in the third quarter.

Those were their final points.

Wake Forest got within three points on Sam Swank’s kick from 33 yards out, but Clemson’s Nick Watkins appeared to seal it by intercepting a pass from Randolph with about 3 minutes left. That’s when it got really interesting.

Two runs netted the Tigers only 3 yards, and Whitehurst’s pass on third down was incomplete. Dean trotted out for a field goal that would have made it 30-24 and forced the Deacons to look for seven points. Instead, holder Cole Chason, who doubles as the punter, took the snap and ran the option with Dean to the left.

No one was fooled, and Wake Forest had another shot. It paid off, thanks to Randolph.

He completed his first eight passes – including two that went for scores – and added a 4-yard TD run of his own as the Deacons build their lead. They were helped by Whitehurst, who threw a pick on his first pass and another two possessions later.