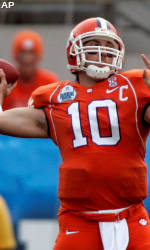 Nebraska (9-4) ended the season with a four-game winning streak, including a victory against rival Colorado, won six of its final seven games and had success in a January bowl game for the first time in nine years.

Clemson (7-6) was hoping to maintain its late-season momentum, too. The Tigers had won four of their last five games after a 3-3 start.

Clemson coach Dabo Swinney looked like he would get a win in his first bowl game. The Tigers led 14-3 at halftime and were making all sorts of defensive plays, but the Cornhuskers dominated the second half.

Nebraska scored on every possession in the third quarter, but kept Clemson in the game by having to settle for field goals.

Henery’s fourth of the day put Nebraska ahead 26-21 with 5:20 remaining. The Tigers had a final chance to go ahead and moved to the Nebraska 10 with 1:54 remaining. But Eric Hagg batted down a pass on first down, then sacked Cullen Harper for a 16-yard loss on the next play.

Harper nearly hooked up with C.J. Spiller on third down, but the ball fell to the ground in the end zone. Harper misfired on the final play.

The Huskers ran out the clock from there.

Both offenses came out cold. There were nine punts, several timeouts, a blocked chip-shot field goal, a failed fourth-down conversion and not a single score in the first 25 minutes of the game. It was a wild affair the rest of the way.

It started when Marcus Gilchrist blitzed into the backfield, slapped Ganz’s pitch to Quentin Castille away, picked the ball up on one bounce and ran 28 yards for a touchdown.

Clemson scored all three of its touchdowns off turnovers. The Tigers also scored after an interception and a muffed punt return.

Nebraska found its rhythm after the break. Ganz found Nate Swift for a 17-yard touchdown and then connected with Todd Peterson for a 6-yard score. Both of them came on third-and-long plays.

The Cornhuskers finished with 362 yards, but still had to sweat out the closing seconds.