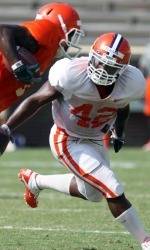 Clemson Defense Striving to Get Better

CLEMSON, SC – Kevin Steele. And guess what? He is fine with that.

Hawkins might want to throw in zero points too. Though the Clemson defense did not produce those kinds of numbers in the two-hour scrimmage at Death Valley, there was one thing that satisfied Steele.

“We had a sluggish non-focused practice on Wednesday, but both of our scrimmages in the stadium have been good, in terms of making some progress,” he said. “(The situational scrimmage) was focus. It was not result oriented I don’t think we were focused.

“Statistically, if you look at that practice, it wasn’t bad, we just were not focused.”

There was plenty of focus on Saturday. Steele thought his first-team defense executed well and there was good communication, though he did admit the tackling was a little sluggish at times.

What Clemson did get was a couple of interceptions, a couple of sacks, some quarterback pressures and zero touchdowns from their first-team defense in regular game situations.

“I think we did a lot of good things today,” Hawkins said. “It seems like we keep progressing from the first scrimmage to now. We still have some things to correct, but they are little things. I think we have to tackle a little bit better as a group.

“We are deep into camp now so our legs are tired and our bodies are sore, so we have to keep working on fixing the little things.”

“The defense’s focus was much, much better,” Clemson Head Coach Dabo Swinney said. “All though our second offense scored on our second defense in the overtime period, which was disappointing, but our second group competed today. They played with a lot of pride and that was something I was really hoping to see, and it was good to see it.”

Though quarterback Tajh Boyd still had a good day overall, he did not have the same kind of success he had in last week’s scrimmage or in the situational scrimmage from Saturday. For just the second time in camp he threw an interception. He finished the day 8 of 14 for 108 yards and touchdown to go along with his interception.

Boyd threw for 180 and 170 yards in the previous two scrimmages, and had four touchdowns and no interceptions.

“We had guys doing the right thing, and they were communicating well,” Steele said. “That second group, I’m a little bit disappointed with them. They have a lot of young guys out there playing like young guys and they have to step up because we are 14 days from having to play them.

“They will play three or four plays real good then they will play a play that I have never seen. That’s a little frustrating, but we will have to keep working to get that right,” Steele said.