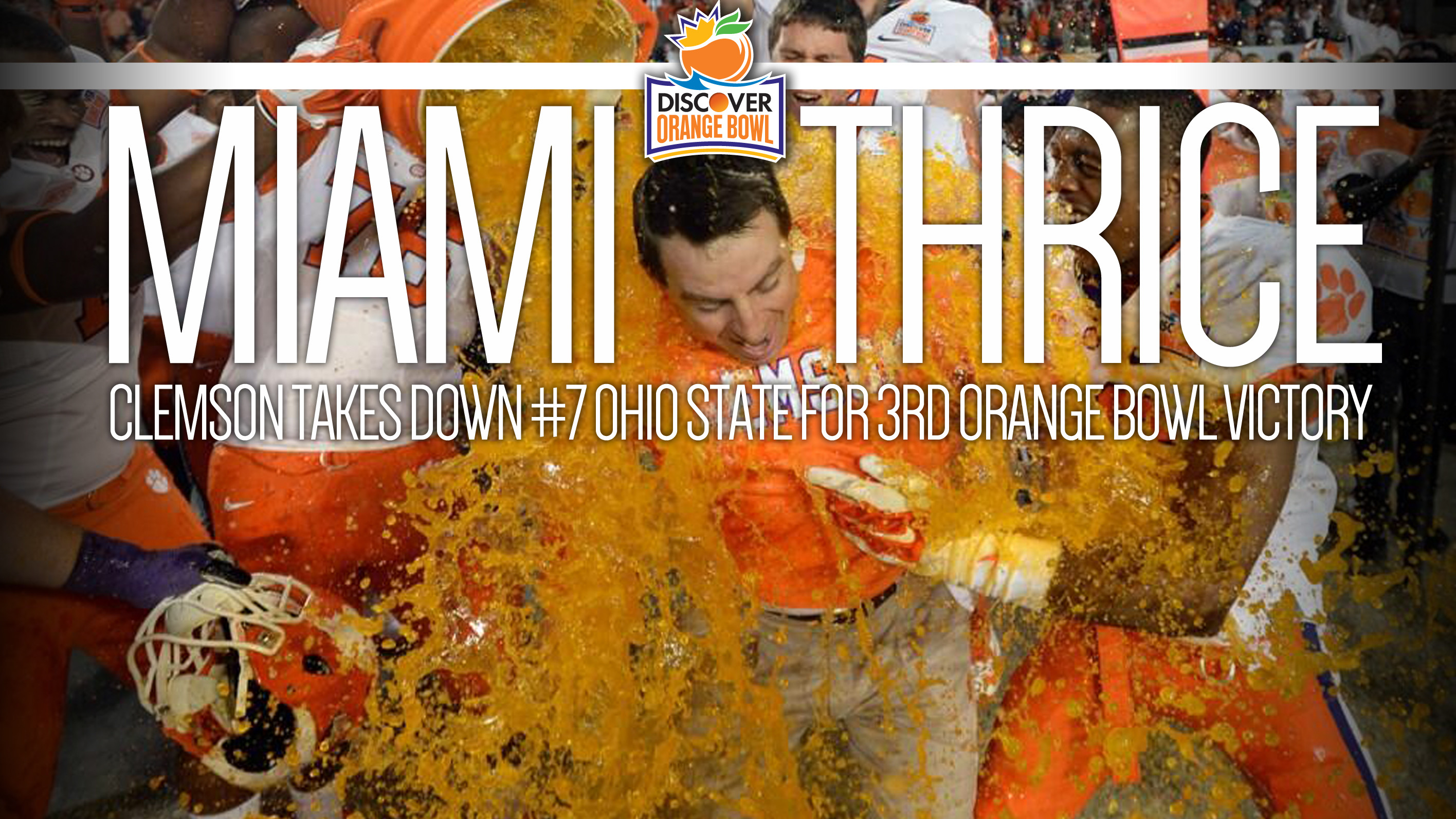 MIAMI GARDENS, FL – Brent Venables bristled a bit earlier in the week when he was asked about the Orange Bowl against Ohio State being billed as a shootout.

While the final score, 40-35 for Clemson, may have indicated that was the case, its defensive coordinator could smile afterward knowing his unit made the plays that made the difference.

The Tigers (11-2) forced four second-half turnovers, including two interceptions on the Buckeyes’ final two possessions, to rally from a halftime deficit for a BCS bowl win and a second straight 11-win season – both firsts in school history.

“It means we’re one step closer to our goal, which is to be the best in the country,” head coach Dabo Swinney said. “Ohio State, what a great football team. … You don’t luck up and get to BCS games. You earn your way there. And you don’t luck up and win them. You’ve got to earn it on the field.”

Stephone Anthony‘s interception with 1:18 left to play sealed the win after Clemson had turned the ball over itself two plays earlier to give Ohio State an opening. That came after a Spencer Shuey interception on the previous Buckeye possession had put the Tigers in the driver’s seat.

“That was fun to watch – just as you draw it up, those guys go out and execute it,” Venables said. “To see those guys do that on back-to-back series, it was pretty special.”

It wasn’t all defense for Clemson, as Sammy Watkins set a school and Orange Bowl record with 16 catches, which went for a school record 227 yards, to garner MVP honors, and Tajh Boyd accounted for 505 yards of total offense and six touchdowns.

“The biggest thing going into this game, we were going to win or lose the game through No. 10 or No. 2. That was the plan,” Swinney said.

Watkins, who had eight catches for 130 yards in the first half, passed Aaron Kelly to become the school’s all-time receptions leader with his first grab of the second half, which gave him 233 for his career.

“The offensive line and the coaches put me in the best situation to make plays,” Watkins said. “Definitely blessed with great coaches and a great quarterback for the past three years. It’s an honor to break all those records, but it’s especially great to do it with the team and have successes with the team.”

For Boyd, he moved into a tie with Rodney Williams (1985-88) for the most wins in school history by a starting quarterback with 32 and also set the record for most wins over ranked teams with eight, including five wins over top-10 teams.

“This is a very special night,” Boyd said. “Just the significance of the game, not for me particularly, not for this team particularly, but for the university, for the fans that support us day in and day out, has been unbelievable. It’s a very special evening. I couldn’t pick a better way to go out as a senior.”

The first half had the feeling of a missed opportunity for Clemson. In the second, the Tigers made sure they didn’t miss another.

Despite outgaining Ohio State by more than 100 yards and largely dominating the game on both sides of the ball, the Tigers went into the locker room trailing 22-20.

That was thanks in part to an of array of missteps that included an interception near the goal line, a turnover on downs that led to a touchdown, a Buckeye drive that was extended twice after Clemson forced fourth down, a safety for intentional grounding in the end zone and a missed extra point.

But the Tigers cashed in on two third-quarter turnovers by the Buckeyes, as Sammy Watkins and then Martavis Bryant made acrobatic catches in the end zone to put them back on top going to the fourth quarter.

Stanton Seckinger put Clemson ahead for good with a 5-yard catch from Boyd with 6:16 left in the game, and Shuey and Anthony’s interceptions finished OSU off.

“We had enough mistakes to probably lose it, some critical errors, but our guys showed a lot of heart, and they got it done,” Swinney said. “So it’s another tombstone going back to Clemson, and we’re excited about that.”

Things looked bleak for the Tigers after Ohio State stretched its lead to 29-20 and got another stop on third down to open the second half.

But Clemson finally got the break it had been so desperately seeking after its offense had been forced to punt on the next drive, as Corey Brown fumbled the punt and Robert Smith was there to recover the loose ball at the Ohio State 33.

The Tigers cashed in three plays later, as Watkins went up and made a sensational catch in the end zone for a 30-yard touchdown that made the score 29-27.

Watkins tied Clemson’s career record for touchdown catches with the 27th of his career with the play.

The Tigers’ defense kept the momentum going on the ensuing drive. On third-and-8, pressure flushed Miller out of the pocket and his pass to the sideline was picked off by Jayron Kearse to give Clemson the ball back at the Ohio State 38.

Four plays later, Boyd and Bryant hooked up on a fade route again, as Bryant hauled in a juggling catch in the back corner of the end zone to put the Tigers back on top 34-29 with 32 seconds left in the third quarter.

Boyd went over 300 passing yards on the drive to pass Philip Rivers for the ACC record for 300-yard passing games with 18 for his career.

The Buckeyes took back the lead on a 14-yard pass from Miller to Hyde to make the score 35-34 with 11:35 to go after their two-point try failed.

The Tigers went back in front on a 5-yard grab by Seckinger, who Boyd found wide open in the end zone for the touchdown. The score put Clemson on top 40-35 with 6:16 to go after the two-point attempt was no good.

With the Buckeyes facing third-and-13 on the ensuing drive, Breeland crashed in on a corner blitz and hit Miller hard, the ball popped loose, and Shuey picked it out of the air at the Ohio State 47.

“Breeland was able to come free and get some pressure on the quarterback,” Shuey said. “He tried to throw it away late, and Breeland was right there on him, and I was able to get the ball and snatch it up before it hit the ground.”

The Tigers gave the ball right back, as Ohio State came up with an interception three plays later, but Stephone Anthony picked Miller off to seal the win.

“I just felt like we got turnovers and got stops when we needed them and got huge plays in the game that turned it around for us and sealed it up,” Anthony said.