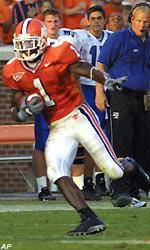 Currie, who finished with 133 yards, broke the Clemson record of 11 set by Phil Rogers in 1965 and tied by Rod Gardner in 1999. Whitehurst also tied a Tigers record for single-game touchdown passes that the sophomore passer matched in his first start against Duke last year.

Whitehurst put the Tigers (2-1) up to stay with a 29-yard scoring pass to Derrick Hamilton with less than four minutes gone. He followed that with TDs of 34 yards to Duane Coleman and 19 yards to Hamilton in the second quarter.

On his last scoring throw, Whitehurst was spun around by a defender yet lofted a perfect toss to Currie for a 4-yard score that gave Clemson a 33-7 lead in the third quarter.

Middle Tennessee, which started 0-3 for the second straight season, expected to carry some momentum into Memorial Stadium after hanging with Georgia for nearly three quarters in a 29-10 loss last week. But the Blue Raiders’ hurry-up offense couldn’t get much going.

They punted their first three series and trailed 27-7 at halftime.

Andrico Hines threw for only 103 yards after 173 a week ago at Georgia.

Clemson had a 28-7 lead against Division I-AA Furman a week ago, then slopped through most of the second half of its 28-17 victory. This time, the Tigers showed no such let up.

They forced Middle Tennessee to punt after a nearly six minute drive, then followed with Whitehurst’s TD pass to Currie.

The Tigers got 30 first downs, had their most yards rushing on the season with 183, their first interception of the year and gave their grumbling fans something to smile about with their play.

Much of the game was a tribute to Jim Phillips, “The Voice of the Tigers” the last 36 years who died Tuesday. Players wore Phillips’ initials “JP” on their helmets, there was a moment of silence before the game, and Phillips’ most memorable calls were played on the stadium’s big screen.