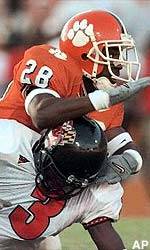 But all five touchdowns in the No. 5 Tigers’ 35-14 victory over Maryland came on the ground Saturday night. Bowden concedes that Clemson’s rushing attack makes this team better.

“You need to have the capability in your offense to do that,” Bowden said.

The Tigers (7-0, 5-0 Atlantic Coast Conference) wanted to blow Maryland (2-4, 0-3) and its NCAA-worst defense away. But Clemson had to settle for a sluggish victory, gaining 464 yards – its second lowest output of the year.

“A lot of people could be happy with that,” Bowden said. “Maybe we want too much.”

Clemson is off to its best start since the 1981 undefeated national championship team. With the undefeated ranks thinning to five Saturday, Clemson fans are talking about national title hopes.

Bowden and his players won’t talk about it. But Maryland coach Ron Vanderlinden said the Tigers have earned their lofty ranking.

“They are very aggressive and gaining confidence with every win,” Vanderlinden said.

Maryland keyed on stopping Dantzler on the run. So the Tigers gave the ball to Travis Zachery, who responded with a career-high 151 yards.

Dantzler converted third-and-1 and fourth-and-1 plays on a second-quarter drive and left Maryland defenders grabbing air on touchdown runs of 9 and 18 yards.

Turnovers and penalties stung Maryland. Calvin McCall was 8-for-21 for 179 yards, but Clemson scored after each of Ardley’s interceptions.

LaMont Jordan ran for 71 yards for the Terrapins.

Clemson put the game away with a 13-play, 80-yard drive that was capped by Dantzler’s 8-yard run.

“We just wanted to pound it. I think even the receivers take pride when we’re running the ball,” Young said.

The Tigers took advantage of good field possession in the first half. Clemson scored all three times they started drives on the Maryland side of the field.

Ardley’s first interception and 32-yard return set up the Tigers’ first touchdown. Two plays later after the interception, Zachery scored on a 3-yard run. It was his 33rd career touchdown, breaking the school record set by Lester Brown in 1979.

Maryland responded with Jason Hatala’s 9-yard run on a reverse for the Terrapins’ first touchdown at Clemson since 1991. Moises Cruz had a juggling 54-yard catch on the drive.

Dantzler’s 19-yard touchdown run put Clemson up 14-7. Dantzler shook one tackler, then outran the rest of the defenders to the corner of the end zone.

A 24-yard pass from Dantzler to Gardner keyed the Tigers’ third touchdown drive, which ended with Zachery pushing the ball over the goal line on fourth-and-goal from the 1. Tony Lazzara’s conversion attempt hit the upright, leaving the Tigers with a 20-6 lead.

The Tigers got a safety off a bad snap on a Maryland punt on the opening drive of the second half.