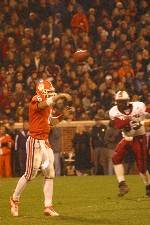 “The offense came back a bit today,” but the defense still seems to have the upper hand,” said Clemson Head Coach Tommy Bowden. He has said many times in the preseason that he hoped the defense would be ahead of the offense. “It is time for Clemson to win some games 10-7 or 13-10. Scoring defense is the most important statistic in football.”

Bowden singled out the play of many young players who will have a chance to help the Clemson defense this year. “Trey Tate continues to do very well in the defensive front. I didn’t think he would be a factor this early, but he certainly is going to be in the mix. Eric Coleman also continues to play well. Justin Miller had an interception today.”

The team scrimmaged in the morning, again a situational scrimmage. The offense had the ball at midfield and had the chance to drive in a series of plays, unlike Wednesday’s first scrimmage of the fall. “The offense drove for a score a couple of times. They made some progress today with a couple of long drives.

“Still, the defense has shown more leadership so far. The defense has more veteran players and Nick Eason, Bryant McNeal and John Leake have shown leadership on defense. We are young in the offensive line and have a lot of new players on offense, so that is expected. But, there seems to be more enthusiasm on defense.”

Clemson’s offense was missing some receivers during the practices on Thursday. Kevin Youngblood continues to work in some drills, but does not scrimmage. He is recovering from a sprained foot. He missed all last year with a broken leg. Jeff Scott, another wide receiver is out with a shoulder problem and freshman Kelvin Grant had a pulled hamstring. “We had Michael Collins running with the first team during some of the practice today and he is not even eligible to play this year, that is how banged up we were at wide receiver today.” Clemson trainer Danny Poole said many of the injured would return on Friday.

On the defensive side DeJuan Polk (ankle), Todd McClinton (hamstring) and Kelvin Morris (stinger) all missed some time due to injury on Thursday. Ben Hall had missed some practice with a sprained neck, then came back in the morning only suffer a pulled thigh muscle. It is not a serious injury. David Dunham is still out after suffering a concussion earlier in the week.