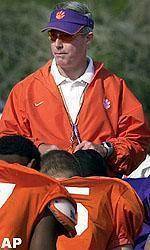 Clemson, SC – Defensive dominated Clemson’s first “situational scrimmage” of the prefall camp on Wednesday. Tommy Bowden’s Tigers worked for two hours and 50 minutes in the morning and two hours in the afternoon. The morning practice included the first extended scrimmaging of the year.

“The practice went very well this morning,” said Bowden. “There were some good hitting out there and it appeared the defense was ahead of the offense. That is where I like to be.

“After we watched the film it was obvious that Eric Coleman and Trey Tate had a good scrimmage among the young defensive players. I wish Todd McClinton could have practiced today, because we are anxious to see what he can do on the inside.

Bowden put his team through a situational scrimmage that lasted about 60 plays. There was goal line work, red-zone work and midfield situations where the offense had the ball on third-and-eight.

Bowden also commended Kevin Johnson for his performance on the day, which included an interception in skeleton drill in the afternoon. “Kevin Johnson has moved back ahead of Toure Francis based on today’s practice. They will be battling it out for a starting cornerback position all preseason.

“Jamaal Fudge also has made some plays. He had another interception in skeleton and also blocked a field goal this morning.”

Bowden complimented the physical condition of his team. “Some of the players said it was one of the hottest days they have seen for a practice. We had to IV about 10 of them after the first practice, but they stayed with it and worked hard all day. Joey Batson and Danny Poole have done a good job getting this team ready.”

Four players missed both practices today. Todd McClinton was out with a pulled hamstring for the second straight day. David Dunham, who was having a good preseason, missed both practices with a concussion, which he suffered in Tuesday’s practice. He will probably be held out until Saturday. Kevin Youngblood went through some of the drills, but did not scrimmage due to a sprained foot.

Note: Among the visitors at practice was former Academic All-American Chad Carson, the leading tackler on Clemson’s 2001 team. Carson, who has lost 30 pounds since concluding his playing career, has spent much of the summer in Germany. He is going to enroll in some classes at Clemson this semester as he applies to various medical schools in the southeast. Carson concluded his academic career with a 3.9 GPA in biology and joined classmate Kyle Young as the only three-time academic All-Americans in Clemson history.