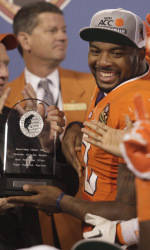 CHARLOTTE, NC – Two weeks of frustration were cured in one quarter Saturday night at Bank of America Stadium as the 20th-ranked Tigers scored 21 points in the third quarter to beat No. 3 Virginia Tech 38-10 to win their first ACC Championship in 20 years.

“We’re a championship program and tonight we added to a great tradition,” Clemson Head Coach Dabo Swinney said. “And I think this was our 18th (conference title) overall and 14th ACC Conference Championship.

With the game tied 10-10 at the break, Clemson forced the Hokies (11-2) to a three-and-out in their first possession and then used a 10-play, 87-yard drive to regain a lead it would not relinquish the rest of the night. Clemson quarterback Tajh Boyd, who was named the Most Valuable Player of the game, threw his second of three touchdown passes with an eight-yard pass to tight end Dwayne Allen in the corner of the end zone to cap the drive.

That gave Clemson a 17-10 lead with 10:45 to play in the third quarter. Allen and Boyd hooked up for a 24-yard touchdown in the first quarter as well. Boyd finished the night 20-of-29 for 240 yards and three scores. In the process, he set Clemson season-single records for total yards and passing yards.

It was a nice comeback for Boyd, who had struggled the previous two weeks.

“Somewhere you’ve just got to dig deep inside yourself, and work through things,” the Clemson quarterback said. “Obviously, you do get a sense of complacency, and if you let it, if you let the outside world influence how you carry yourself and how you act…I mean, that’s just one of the life lessons learned.

“I feel like that’s one of the things that happened, and it happened for a reason, to let you know that all you can really do is believe in yourself and your family, which is my teammates. I’m just proud to be here.”

Boyd was even more proud on the Tigers next possession, as he hit Sammy Watkins in stride for a 53-yard touchdown pass that gave Clemson a 24-10 lead.

After another three-and-out forced by the Clemson defense, which held ACC Player of the Year David Wilson to 32 yards on 11 carries, the Tigers scored again, this time on a 29-yard touchdown run by Andre Ellington. The Clemson running back finished with 125 yards on 20 carries. This, a week after the Hokies held Virginia to 30 yards rushing.

“I’m proud of Andre Ellington. He was big time player tonight on a big stage,” said Swinney. “He was one of the big keys in the game for us because we were able to run the football.”

Boyd added his fourth touchdown responsibility of the night to cap the night’s scoring with a one-yard plunge with 13:04 to play. From that point on, the celebration was on.

“Ladies and gentlemen, I would like to announce that I will be taking my Clemson talents to South Beach, baby,” Swinney said. “I have wanted to say that. We’re excited. Man, it’s just a great time. We are awfully excited about going to Miami.