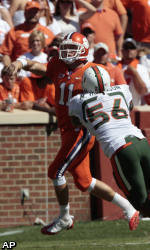 Harris had all four of his scoring throws in the opening half as the Hurricanes (3-1, 1-0 ACC) led 27-14. Then they called on their top-rated ACC defense to hang on.

Ahead 27-21, cornerback Brandon Harris stopped Andre Ellington on 4th-and-1 from Miami’s 20 with 8:20 to go that ended the Tigers comeback.

Clemson (2-2, 0-1) came into the game leading the ACC in fewest turnovers with just two its first three games. But Miami forced the Tigers into three fumbles and three interceptions.