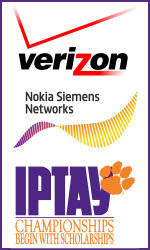 The Clemson Athletic Department is proud to announce that it will offer the Verizon Wireless, Nokia Siemens Networks, IPTAY 2012 Clemson Football Signing Day Webcast on Wednesday, February 1. The show will be broadcast live, for free, on ClemsonTigers.com via TigerCast.

Starting at 7:00 AM, the show will be live for four hours of uninterrupted coverage of the Tigers’ Signing Day results. The show will include blocks of live reporting about Clemson’s signees, as it becomes permissible to announce them. The show will also include interviews with all eight of Clemson’s mid-year enrollees, as well as highlight clips of the team’s newest signees.

Director of Creative Media Services Don Munson will be the host, and will conduct interviews with Recruiting Coordinator Jeff Scott, Offensive Coordinator Chad Morris and new Defensive Coordinator Brent Venables throughout the show. The four-hour broadcast will conclude with an interview with Head Coach Dabo Swinney.

Fans will have the opportunity to submit questions via the Clemson Athletics Facebook Page to be answered on air. One lucky fan who submits a question via the Facebook page will win a Verizon Wireless mobile device.

As in the past, ClemsonTigers.com will also produce a Signing Day Central webpage, which will contain the most up-to-date information on Clemson’s 2012 football recruiting class. The page will be updated as each National Letter of Intent is received and fans will be able to read about the new Tigers as they sign with Clemson.