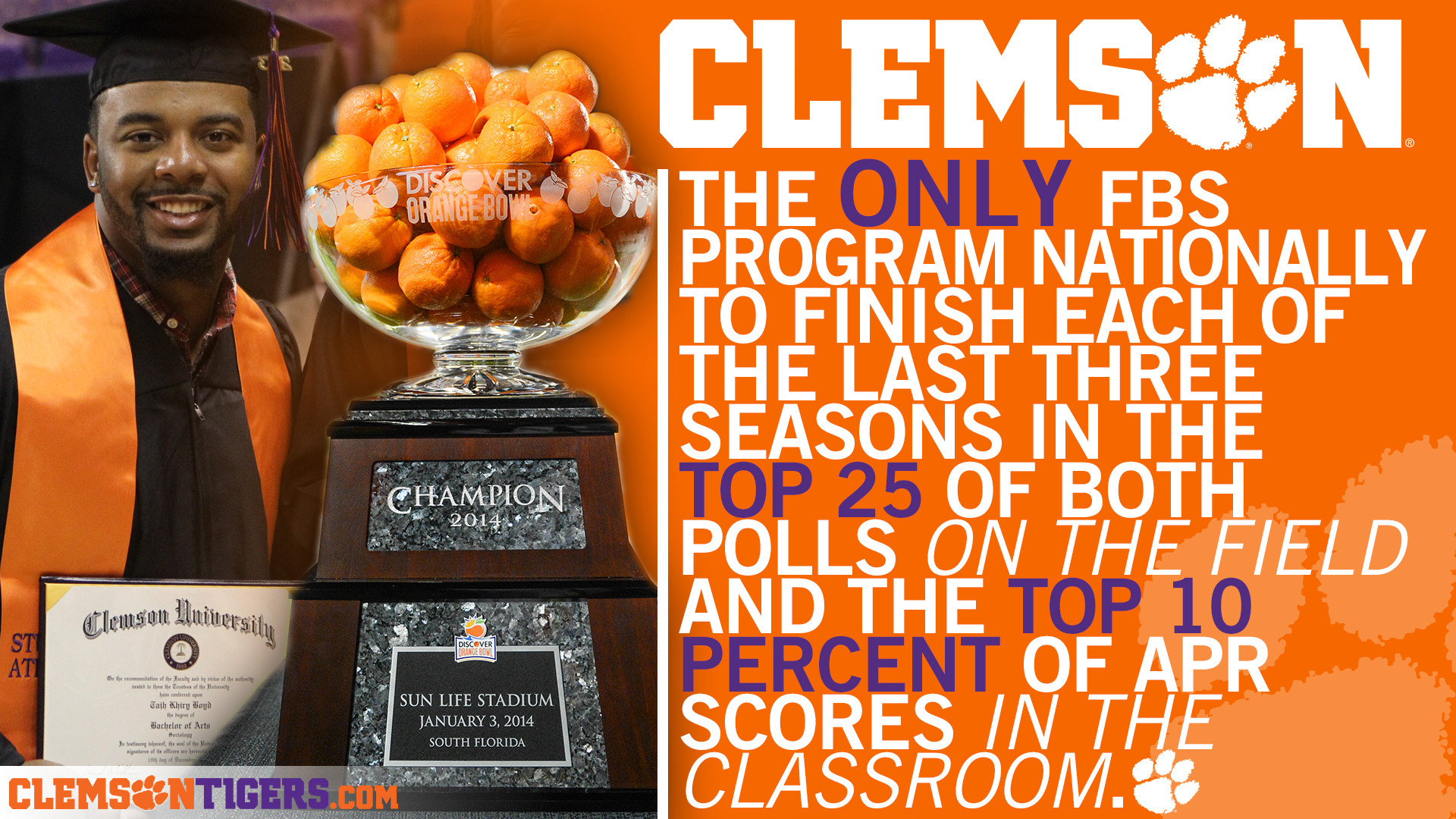 CLEMSON, S.C. – The Clemson football program was honored Wednesday when the NCAA released its Academic Performance Public Recognition Awards. Dabo Swinney’s Tigers rank among the top 10 percent of all FBS programs nationally in APR score (Academic Progress Rate), the fourth-consecutive year the program has had a top 10 percent ranking.

Clemson and Stanford are the only two FBS programs with a top 10 final ranking in the USA Today Coaches poll and a top 10 percent ranking in FBS APR scores each of the last two years.

Clemson was one of 13 schools honored on Wednesday, and the ACC had the most representatives on the list with four, as Duke, Boston College and Georgia Tech were also named.

“This is a tremendous accomplishment and a testament to the hard work of Coach Swinney, our coaches, student-athletes and staff and their commitment to the academic mission of the Clemson football program,” Director of Athletics Dan Radakovich said.

Excellence in the Academic Progress Rate has translated into a strong graduation rate for the Clemson football program. Over the last four years, 67 of Clemson’s 72 seniors have earned degrees, 93.1 percent.

“We try to be the best in every area of our program and I am proud we have been ranked in the top 10 percent in the APR each of the last four years,” said Swinney, who has been Clemson’s head coach since the end of the 2008 season. “We place great emphasis on the total package when it comes to preparing our young men for the future.

“I want to thank our coaching staff and our players. I want to especially thank the people at Vickery Hall (Clemson academic learning center). With the leadership of Steve Duzan, Wayne Coffman, Matt Lombardi and Ashton Henderson we have the best academic support staff in the country.”

The Academic Progress Rate is a metric developed to track the academic achievement of teams each academic term. Each student-athlete receiving athletically related financial aid earns one retention point for staying in school and one eligibility point for being academically eligible. A team’s total points are divided by points possible and then multiplied by one thousand to equal the team’s Academic Progress Rate score.