CLEMSON, S.C. — The Atlantic Coast Conference announced its 2019 football schedule on Wednesday, and Clemson will kick off its 2019 campaign on Thursday, Aug. 29, when the team hosts Georgia Tech at Memorial Stadium in the first game ever to be broadcast on the soon-to-be-launched ACC Network.

Clemson’s season opener against Georgia Tech will mark the first Thursday night season opener Memorial Stadium history. The teams met in a 49-21 Clemson victory in Atlanta last season, as Clemson’s 49 points were the most scored by the school all-time at Grant Field in Atlanta since the field’s opening in 1913.

The following week, Clemson will host another marquee matchup at Memorial Stadium, welcoming the Texas A&M Aggies. Last season, Clemson defeated Texas A&M, 28-26, at Kyle Field, in front of an announced crowd of 104,794 people, the largest crowd ever to witness a Clemson football game in person.

Clemson’s first road contest of the season will come in conference play when the Tigers face Syracuse. The Tigers defeated the Orange in memorable fashion in 2018, preserving Clemson’s chance at an undefeated season by engineering a 13-play, 94-yard touchdown drive to earn the come-from-behind win last September.

Clemson will return to Memorial Stadium for a non-conference contest against Charlotte. It will be the first meeting between the two schools all-time. Including a win in the first all-time meeting between Clemson and Georgia Southern in 2018, Clemson holds a 62-38-4 all-time record when facing an opponent for the first time.

Clemson will face North Carolina in the Tigers’ first trip to Chapel Hill since 2010. The Tigers and Tar Heels have met three times since the teams’ last contest in Chapel Hill, with Clemson going 3-0 in those contests including home wins in 2011 and 2014 and an ACC Championship Game victory in Charlotte in 2015.

Following an open date, the Tigers will return to action when they play host to the Florida State Seminoles. Clemson is currently riding a four-game winning streak against the Seminoles, holding the distinction as the only ACC program ever to defeat Florida State in four consecutive seasons. After losing its first seven home games in its series with Florida State, Clemson has since won seven of its last eight home contests against the Seminoles dating back to 2003.

The following week, Clemson will face the Louisville Cardinals on the road. Clemson is undefeated against Louisville, having pushed its all-time record in the series to 5-0 with a 77-16 victory at Memorial Stadium in Clemson last season.

Clemson will conclude the homestand against Wofford in the first weekend of November. The game represents a renewal of a series that dates back to 1896, when the first team in Clemson history, coached by Walter Riggs, earned a 16-0 victory against Wofford.

Clemson’s final ACC road game will be against the NC State Wolfpack. The teams met at Memorial Stadium in Clemson in 2018 in a battle of Top 25 teams, in which Clemson earned a decisive 41-7 victory. The 34-point margin of victory was Clemson’s second-largest in the 87-game all-time series between the two programs and tied for Clemson’s second-largest margin of victory against a ranked opponent all-time.

Clemson will conclude its home slate against Wake Forest. The Tigers’ historic offensive attack was on full display in the teams’ 2018 meeting, as Clemson averaged 10.0 yards per play and recorded a then-school-record 11.8 yards per carry in a 63-3 win to post the largest margin of victory in conference play in school history.

Following a second open date, the Tigers’ will conclude regular season play on the road on Saturday, Nov. 30, against South Carolina. Clemson is currently in the midst of a five-game winning streak in the series. A win this season would pull Clemson within one win of the longest winning streak by either team in the rivalry (seven by Clemson from 1934-40).

Clemson fans can catch their first glimpse of the 2019 Tigers on Saturday, April 6, when the team hosts its annual Spring Game at Memorial Stadium.

In order to receive the 2019 online football season ticket application, all IPTAY donors must pledge and complete 50 percent of their IPTAY 2019 donation by Friday, Feb. 15. To make your pledge and 50 percent payment for the IPTAY 2019 year, please click HERE. Season tickets for both renewals and new orders will go on-sale Friday, March 1 to IPTAY members who have completed their pledge.

More information on ticketing for the 2019 Clemson Football season will be available by visiting ClemsonTigers.com or by calling 1-800 CLEMSON. 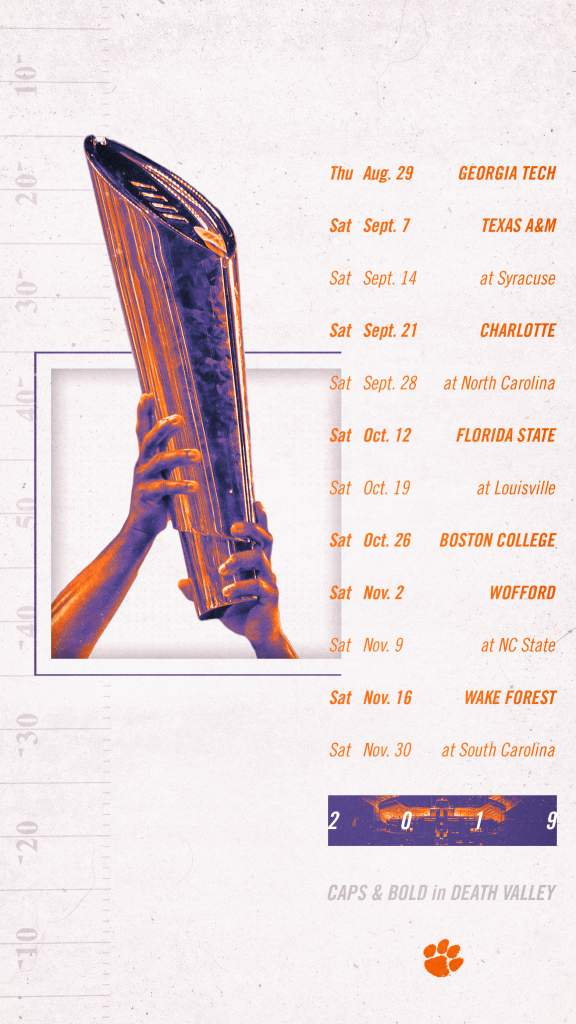 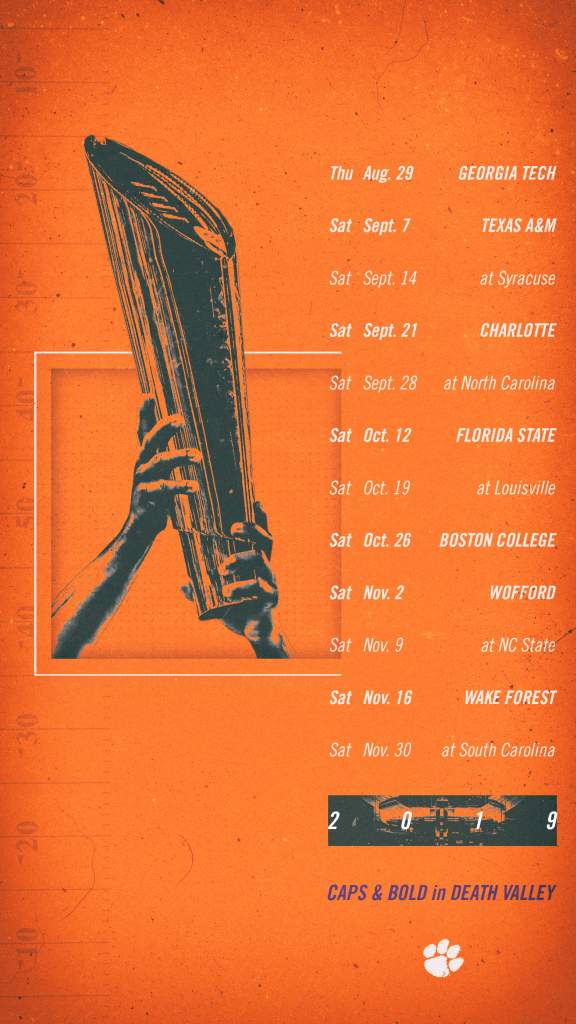 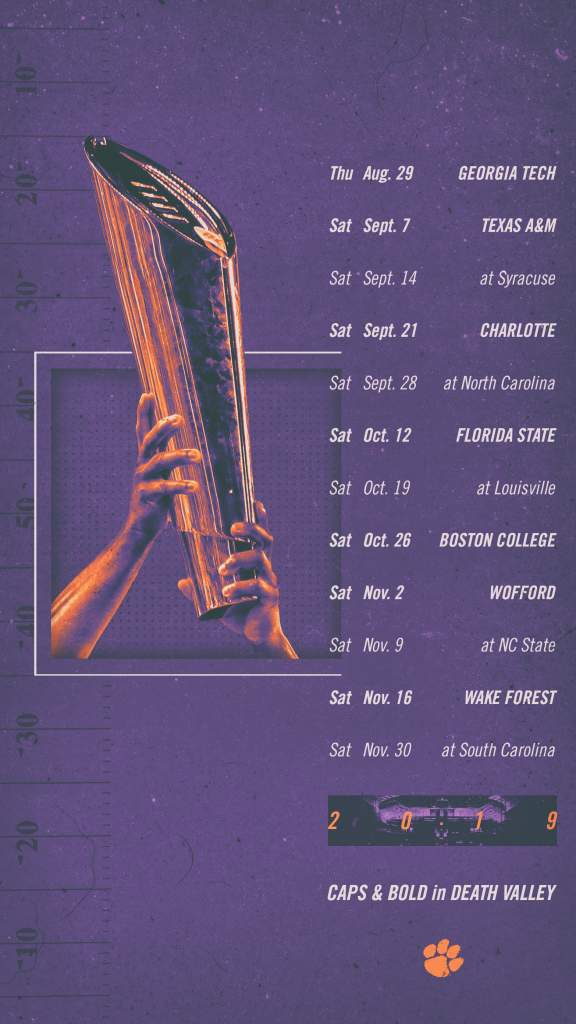