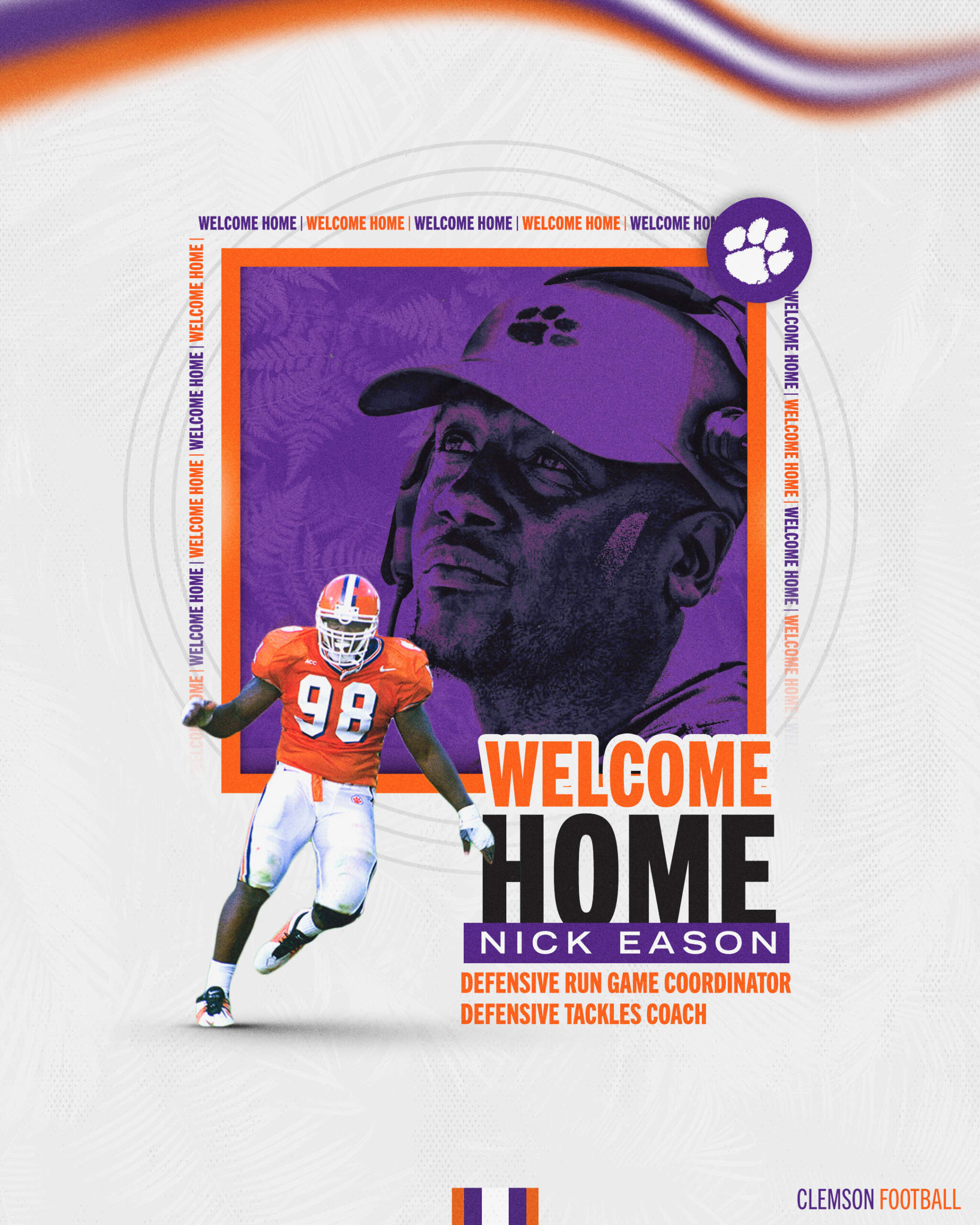 A veteran of 17 combined NFL seasons as a player and coach, Eason will join Defensive Ends Coach Lemanski Hall to give Clemson’s talented defensive line group the guidance of a coaching duo with 26 combined seasons of NFL experience.

“Nick is the epitome of what I look for in a coach,” said Swinney, whose full comments are included below. “He has an incredible passion for the game, he has got a great background and he truly loves the player. In this hire, I really wanted a guy who had great experience at the NFL level. I wanted somebody who has coached the best of the best at the highest level, and that’s exactly what he’s done. He was a great player at Clemson and he’s a great Clemson man.”

Eason returns to Clemson, where he was a four-year letterman for the Tigers from 1999-2002. In addition to being a team captain, All-ACC selection and Strength & Conditioning All-American, he was also a standout in all areas away from the game, earning a selection to the AFCA Good Works Team and becoming the first Clemson football player to graduate with two years of eligibility remaining after earning a degree in sociology in August 2001. He later added a master’s degree in human resource development in 2008. Eason played 47 games with 35 starts for Clemson, recording 15 sacks and 30 tackles for loss. He was a two-time Dedication Award winner as awarded by the Clemson strength & conditioning staff.

Eason’s playing career included 117 NFL games over 10 seasons from 2003-12 with the Cleveland Browns, Pittsburgh Steelers and Arizona Cardinals. Eason was originally a fourth-round selection by the Denver Broncos in the 2003 NFL Draft, but he spent his rookie season on the Reserve/Injured list after suffering an Achilles injury during training camp.

Eason finished his playing career with the Cardinals, where he spent two seasons from 2011-12, appearing in 32 games and registering two sacks. Prior to his time with Arizona, Eason spent four seasons with the Steelers from 2007-10 and helped the team to two Super Bowl appearances, including a victory in Super Bowl XLIII in the 2008 season.

Eason transitioned to coaching in 2013 as a coaching intern for the Browns, for whom he had previously played three seasons from 2004-06. In 2014, he was hired by the Tennessee Titans and helped oversee Tennessee’s transition from a 4-3 to a 3-4 front. He spent two seasons as an assistant defensive line coach from 2014-15 before becoming the Titans’ defensive line coach in 2016-17, helping defensive tackle Jurrell Casey to the first three of his five career Pro Bowl selections to date in those four years.

From 2019-20, Eason served as defensive line coach for the Cincinnati Bengals. In his first season, Eason led significant improvement in the Bengals’ defensive line as the season progressed, notching an 11-sack improvement and an 84.1-yard reduction in yards per game in the second half of the season. Under Eason’s guidance, defensive tackle Geno Atkins earned his eighth Pro Bowl selection.

Most recently, Eason served as defensive line coach at Auburn, helping the Tigers to their largest sack total since 2018 in his first season. Auburn allowed the third-fewest yards per carry in the SEC and finished fourth in the conference in tackles for loss in his debut campaign on the Plains.

“I am super, super excited to welcome Nick Eason back to Clemson. Unfortunately, I didn’t have the opportunity to know him when he was a player here; he was before me, but I vividly remember meeting him when I first got here in the spring of 2003. He was training for the NFL Draft, he had just finished his last season and I remember meeting him and I was struck immediately with his presence, how he carried himself and how he was respected by all.

“And then obviously being here now 19 years, I’ve had many opportunities to be around him and get to know him and follow him. He’s a guy that I’ve followed for many years and a guy that I’ve had my eye on for our staff for many years. I just hadn’t had the right opportunity with the right timing to hire him, but, man, as we always say, everything is always on God’s timing. This was the right time for us at Clemson and also for Nick.

“Nick is the epitome of what I look for in a coach. He has an incredible passion for the game, he has got a great background and he truly loves the player. In this hire, I really wanted a guy who had great experience at the NFL level. I wanted somebody who has coached the best of the best at the highest level, and that’s exactly what he’s done. He was a great player at Clemson and he’s a great Clemson man.

“Not only was he a great player at Clemson, but he was a great pro. He was incredibly respected all throughout his career as a player and coach. He’s coached the best of the best, he’s a Super Bowl champion, but I love his passion for coaching and teaching young people. He’s been drawn to the college level by the impact he can have on a young person’s life, and he just really fits and aligns with our values here at Clemson. It’s just an added bonus that he happened to be a great player here at Clemson.

“This opportunity to hire Nick obviously came in the wake of a new opportunity for Todd Bates. I want to thank Todd for the great job he did for us these past five years, and I am excited for his new opportunity with Brent [Venables] at Oklahoma.

“Clemson is a special place. It has been family to me since I first took a visit as a recruit in 1997. I have continued the relationships I started almost 25 years ago with the fans, the administration and the coaching staff.

“I want to thank Coach Swinney for the opportunity to be a part of a program with such a rich tradition, one that has become one of the best in the nation. I also can’t wait to work with Chief of Staff Woody McCorvey, who I have known and respected for many years.

“Most of all, I am looking forward to working with one of the best defensive lines in the country.”