CLEMSON, S.C. — The Atlantic Coast Conference announced its 2020 football schedule on Wednesday, and Clemson will kick off its 125th season on Thursday, Sept. 3, when the team opens the season on the road at Georgia Tech.

Gameday designations for the 2020 season will be announced at a later date. Clemson fans can catch their first glimpse of the 2020 Tigers on Saturday, April 4, when the team hosts its annual Spring Game at Memorial Stadium at 2:30 p.m.

In order to receive the 2020 online football season ticket and parking application, all IPTAY donors must pledge and complete 50 percent of their IPTAY 2020 donation by Saturday, Feb. 15. To make your pledge and 50 percent payment for the IPTAY 2020 year, please click HERE. Season tickets for both renewals and new orders will go on-sale Sunday, March 1 to IPTAY members who have renewed and completed 50 percent of their pledge.

More information on ticketing for the 2020 Clemson Football season will be available by visiting ClemsonTigers.com or by calling 1-800 CLEMSON. 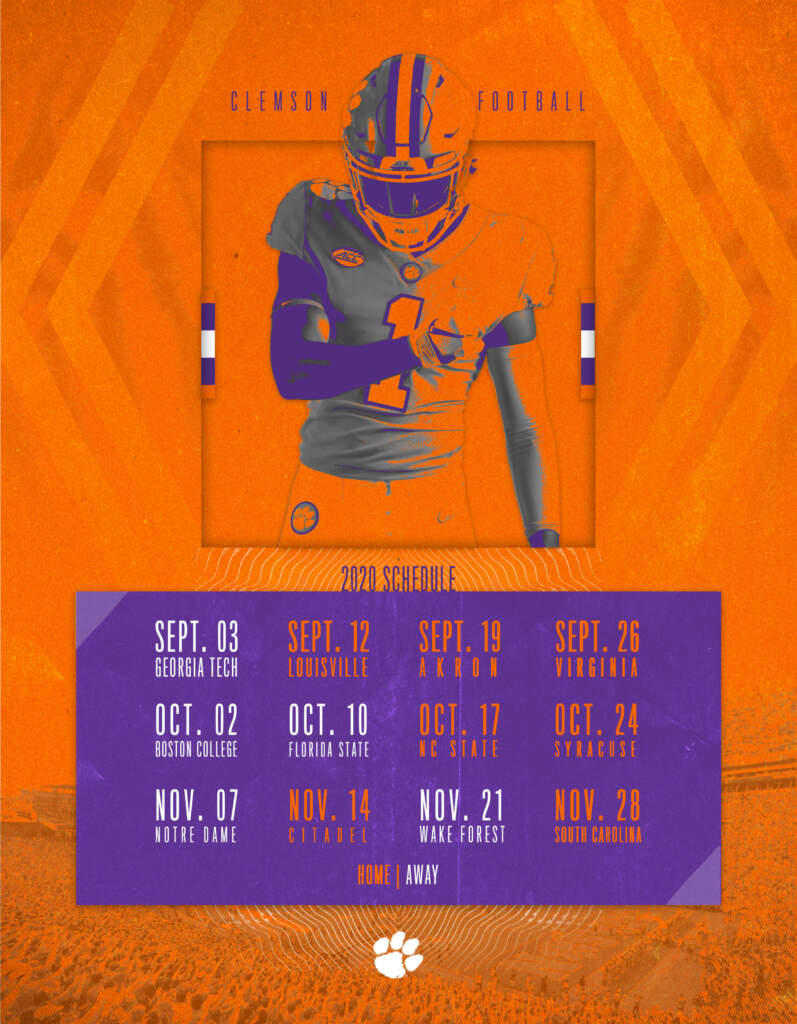 Clemson enters its Sept. 12 contest with Louisville 6-0 all-time against the Cardinals, the fifth opponent in school history against whom Clemson won its first six games. Clemson has scored 42, 47, 77 and 45 points in its last four meetings with Louisville, respectively, representing Clemson’s first time scoring 40-plus points in four straight games in a series with an ACC opponent.

After opening the season with two conference contests, Clemson will play its first non-conference game of the season on Sept. 19, when the Tigers face the Akron Zips at Memorial Stadium. The game will represent the first meeting of the two schools and will be Clemson’s third game against a MAC opponent during Dabo Swinney’s head coaching tenure, including a 52-27 win against Ball State in 2012 and a 56-3 win against Kent State in 2017.

On Friday, Oct. 2, Clemson will return to the site of its most recent Friday victory, a 56-10 win in Chestnut Hill in 2016. Last season, Clemson produced one of its most dominant performances of 2019 against Boston College, outgaining the Eagles, 674-177. The 497-yard differential was Clemson’s largest yardage differential against an ACC opponent since the conference’s founding in 1953, surpassing a 464-yard advantage against Wake Forest in 2000.

Clemson will attempt to earn a sixth consecutive victory against Florida State and continue its recent run of hot starts in the series when the Tigers face the Seminoles in Tallahassee on Oct. 10. The Tigers carried a 28-0 lead into halftime in both Clemson’s 59-10 win in Tallahassee in 2018 and 45-14 win in Clemson in 2019. In the last two games between the two programs, Clemson has combined to post a 56-0 edge in points, a 614-128 advantage in total yards and a 35-10 advantage in first downs in the first half.

One year after Clemson defeated NC State in Raleigh to earn the ACC Atlantic Division title, the Tigers will welcome the Wolfpack to Death Valley on Oct. 17. Clemson has won 15 of its last 16 games against NC State, including each of the last eight, the longest winning streak by either team in the all-time series. The teams most recent meeting at Death Valley was in 2018 in a battle of undefeated Top 20 squads, when Clemson ran out to a 34-0 third-quarter lead en route to a 41-7 victory on Homecoming.

On Oct. 24, Syracuse will make its first trip to Death Valley since Clemson’s memorable 27-23 come-from-behind victory that helped propel Clemson to a 15-0 record and a national championship in 2018. Clemson is 6-2 against Syracuse all-time, including a 3-0 home record. Clemson has been ranked in the AP Top 25 in all eight all-time contests against Syracuse, including a Top 3 ranking in six of the last seven matchups with the Orange.

In a battle of historic programs, Clemson and Notre Dame will meet for the fifth time all-time and for the third time in a six-year span when the teams clash on Nov. 7. After dropping the teams’ first meeting in 1977, Clemson has won each of its last three games against Notre Dame, including a 16-10 win in South Bend in 1979, a memorable 24-22 win in torrential rain in Clemson in 2015, and a 30-3 win in the College Football Playoff National Semifinal at the Cotton Bowl Classic in 2018.

Clemson will welcome the Bulldogs of The Citadel to Death Valley on Nov. 14, part of Clemson’s annual scheduling philosophy that has featured an in-state FCS opponent every year since 2007. Clemson is 34-0 against FCS opponents since Division I split in 1978, winning 33 of the 34 games by double digits.

Clemson will conclude regular season conference play on Nov. 21 at Wake Forest, where Clemson posted one of its most prolific rushing games in history in its most recent visit in 2018. In a 63-3 win at Wake Forest in 2018, Clemson rushed for 471 yards and averaged 11.8 yards per carry, breaking the previous school record for yards per carry set on Oct. 17, 1903 against Georgia Tech (11.2). Running backs Travis Etienne, Lyn-J Dixon and Adam Choice all helped Clemson record the first game in school history in which three different Clemson players exceeded 125 rushing yards in a single game.

Clemson will conclude regular season play against rival South Carolina on Nov. 28. The Tigers have won each of their last six contests against the Gamecocks, and another Clemson victory this season would match the longest winning streak in series history by either program (seven by Clemson from 1934-40).