It has been a busy 12 months for C.J. Spiller with life-changing moments. Since August 2020, he has returned to Clemson to join Dabo Swinney’s staff as a volunteer coach during the pandemic-stricken 2020 season, received word he was going to be inducted into the College Football Hall of Fame and the South Carolina Athletic Hall of Fame, gotten married to his longtime girlfriend, Daysha, and started a coaching career as a full-time member of Swinney’s staff.

But as he did when he graduated from Clemson in three-and-a-half years while having an All-America career on the gridiron, he is up for the challenge.

“I figure if I can help my wife prepare for a wedding during a pandemic, I can handle anything,” said Spiller with a smile.

Let’s talk about these events in chronological order.

Shortly after retiring from the NFL following an eight-year career that included a 2012 Pro Bowl season, when he was sixth in the NFL in yards from scrimmage, he returned to South Carolina and began a career in coaching…girls track as a volunteer at Liberty High School.

It proved to be a life-changing experience.

“I really didn’t think much about coaching when I was a player,” admitted Spiller. “That was certainly the case when I was at Clemson. When you are in college, you just think about winning the next game. That is really the same feeling I had in the NFL.

“But when I retired and started coaching those kids (seventh grade through 12th grade), I came to the conclusion that this was my calling. I want to help people become successful and pass on some of the wisdom I was given when I was younger. That goes for athletics and academics. I want to make a difference in their lives.”

After two years working with the young track athletes at Liberty High School, Spiller went to Swinney and told him he wanted to get into the Clemson master’s degree program.

“I told Coach Swinney how much I enjoyed coaching at Liberty, and he invited me to join his staff while I pursued a master’s degree.

“He was ecstatic when I told him ‘yes,’ which only got me more excited.”

During the 2020 season, Spiller spent time learning from Offensive Coordinator Tony Elliott, who like Spiller, played for Swinney at Clemson.

“I sat in all the running backs meetings and saw how Coach Elliott managed the room, and how he prepared his players for the game plan. I was so impressed how organized he was.”

In the first week of January, Spiller was at home cleaning out a closet when he got a Facetime call from Swinney. He asked to speak with Spiller’s then-fiancée.

“I was standing next to her and Coach Swinney started telling her that I was his first five-star recruit, his first first-round draft pick, his first former player to make the Pro Bowl…and his first player to be inducted into the College Football Hall of Fame. I was shocked. I knew I’d been on the ballot the year before, but I didn’t expect to make it in just the second year.

“I was floored. To be among the greats in college football history, with many players I looked up to as a kid, this is a great honor and I look forward to representing the Clemson program and my former teammates.”

Spiller will be honored at halftime of today’s game, then he will be formally inducted on Dec. 7, 2021 at the National Football Foundation banquet, which is in Las Vegas, Nev. for the first time.

That honor is no surprise to those of us who saw Spiller play every game in his Tiger career. He has no opponent when it comes to providing thrills on the field. He had 21 touchdowns of 80+ yards, more than double any other player in Clemson history.

Spiller was named a unanimous first-team All-American in 2009, and he was named ACC MVP and finished sixth in the Heisman Trophy voting. That year, he became the first ACC player with 1,000 rushing yards and 500 receiving yards in one season.

He finished his career with 7,588 all-purpose yards, still the ACC record by nearly 700 yards over second-place Travis Etienne and still among the top-five figures in NCAA history.

A month after he received the call from Swinney informing him of his hall of fame selection, Swinney decided to make some changes in his full-time staff, creating an opening.

In late January, Swinney asked Spiller if he was ready to make the jump from volunteer coach to full-time running backs coach. By the end of February, he was on the field coaching the position he played at Clemson just 12 years earlier.

It would be a challenging spring because Clemson’s all-time leading rusher, Etienne, had graduated.

“With Travis graduating, all the running backs knew playing time would be up for grabs. It created great competition.”

Spiller brings extraordinary knowledge of the position to his young group.

“I learned from some great position coaches in the NFL. My first coach in Buffalo was Curtis Modkins (now running backs coach with the Denver Broncos and a 25-year NFL coaching veteran). He was very detailed and put an emphasis on being a professional. He treated us like professionals, and I try to pass that on to my players today.

“He was not a yeller and I am not a yeller at practice. He stressed doing things correctly and in a timely manner. He was also huge on getting mental reps. The fewer mistakes you make, the better you will play.

“I also played for Tyrone Wheatley, who played in the NFL for 10 years and is now the head coach at Morgan State. He was someone I could relate to because he was a great player. He trusted us and we trusted him. He showed me the importance of trust and confidence in the relationship between a coach and a player and the importance of a coach having his player’s back.

“I ended my career in Kansas City with Eric Bieniemy, who is one of the top offensive coordinators in the NFL. He showed me the importance of paying attention to detail. In a lot of ways, he is like Coach Elliott. Eric told us if the route calls for a cut after five yards, don’t make it after six. He would explain to us why it had to be at five yards to help us understand why it was important.

“Eric also stressed being engaged at meetings. He would ask a lot of questions to keep his players engaged, and that is something I now do. We all must become students of the game.”

I concluded my interview with Spiller going down memory lane of his Clemson career. We talked about his first touchdown, a thrilling 82-yard touchdown on a short pass from Will Proctor in which he must have run 120 yards. We talked about the Georgia Tech game his freshman year that was a coming-out party for him and teammate James Davis during the first time ESPN College GameDay was at Clemson. It was the birth of “Thunder & Lightning.”

We talked about the 2009 Virginia contest, his final home game when Clemson finally clinched its first ACC Atlantic Division title.

“I ran down the Hill with the American Flag prior to the game. I had a brother who was in the service, so that meant a lot.”

But his most memorable moment as an undergraduate took place in Littlejohn Coliseum, not Death Valley.

“The day I graduated is something I will never forget. It was a day I felt so in touch with all of my Clemson classmates, not just football players. Then when I walked across the stage, I got quite an ovation and the Board of Trustees stood up.”

One of just two times on record the Board of Trustees has given a graduate a standing ovation (the other was a student who graduated after attending every class as a quadriplegic), Spiller received many standing ovations in his career.

Most likely, he will receive another this evening. 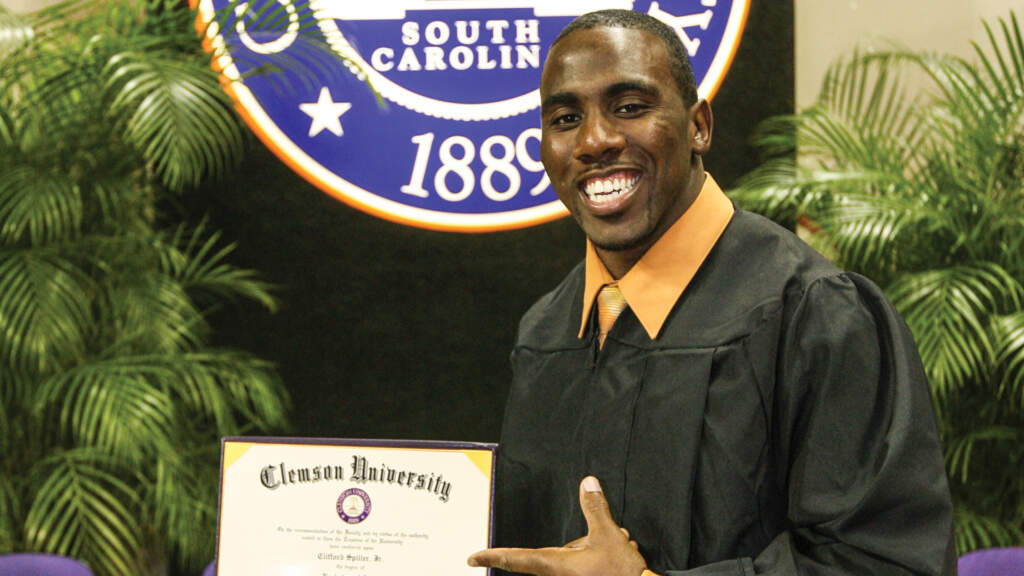