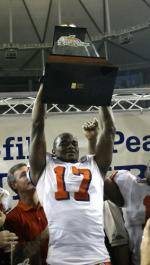 The Atlantic Coast Conference and Southeastern Conference team selections for the 38th edition of the Bowl are scheduled to be announced Dec. 5. The Chick-fil-A Peach Bowl is the only guaranteed ACC vs. SEC match-up in the bowl business.

Clemson (6-4, 4-4) hopes to extend their win streak to three games after defeating then-No. 19 Florida State, 35-14, last Saturday. The Tigers have won three straight over the Gamecocks, and seven of the last eight meetings in Columbia. Clemson has made six Chick-fil-A Peach Bowl appearances, the last one a 27-14 win over Tennessee in 2003.

South Carolina (7-3, 5-3) is riding the first five-game SEC win streak in school history after a 30-22 victory over the Florida Gators. The Gamecocks are ranked No. 23 in the Bowl Championship Series standings and No. 21 in the USA Today Coaches Poll.

The game, the 97th consecutive meeting and 103rd overall between the in-state foes, will kick-off at 7 p.m. ET and will be televised on Pay-Per-View.

On Dec. 31, 2004, the 37th annual Chick-fil-A Peach Bowl recorded its eighth straight sellout at the Georgia Dome, set the highest all-time payout of $2.3 million per team and contributed a record $410,286 in scholarship and charitable contributions, the most by any bowl game last year. The Bowl also drew the third-highest television ratings ever for a bowl game on ESPN.