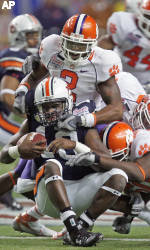 ATLANTA (AP) — Freshman quarterback Kodi Burns threw for a touchdown and scored on a 7-yard run in overtime to lead Auburn to a 23-20 victory over Clemson in the Chick-fil-A Bowl.

After Mark Buchholz kicked a 25-yard field goal on Clemson’s opening possession of overtime, Burns scored on a spinning run on a third-and-3 play.

Auburn’s starting quarterback, Brandon Cox, ran for a first down on a fourth-and-1 play from the 16 to keep Auburn’s overtime possession alive.

Cullen Harper was only 12-for-29 passing for 91 yards as Clemson was held to 11 first downs and 276 yards in regulation.

Burns played behind Cox as Auburn played its first game in the spread offense installed by new offensive coordinator Tony Franklin, who was hired after the regular season.

Burns threw a 22-yard touchdown pass to Mario Fannin for his only completion of the game and had 13 carries for 69 yards, including the winning run.

There were concerns that the attempt to implement Franklin’s offense so quickly could lead to confusion in Auburn’s first chance to make use of the scheme in a game.

The good: Auburn drove 58 yards on 11 plays as Cox and Burns shared snaps. Cox opened the game in the shotgun and completed passes of 9 yards to Cole Bennett and 28 yards to Rodgeriqus Smith.

The bad: The lack of familiarity showed with two false-start penalties, including one by freshman Ryan Pugh two plays before a 36-yard field goal by Wes Byrum.

Spiller’s long run was the only offensive highlight of the first half for Clemson.

On a second-down play from the Clemson 17 early in the second quarter, Spiller appeared to be stopped at the line by Auburn’s Josh Thompson and Quentin Groves. But Spiller bounced out to his left, turned the corner and suddenly had open field down the Clemson sideline. Spiller stayed a step ahead of Auburn cornerback Jonathan Wilhite in the race to the end zone.

Auburn opened the second half with a 10-play, 78-yard touchdown drive. Burns ran for 12 yards on a third-and-2 play early in the drive, and he added a 5-yard run three plays later.

On third and 7 from the Auburn 22, Burns scrambled to his right before passing to Mario Fannin, who ran past Clemson linebacker Josh Miller for the touchdown and a 10-7 lead.

A 20-yard run by Spiller helped set up a 22-yard field goal by Mark Buchholz on the first play of the fourth quarter for a 10-10 tie.

The tie held until the first turnover of the game.

A pass by Cox was deflected by cornerback Crezdon Butler and intercepted by defensive tackle Rashaad Jackson at the Auburn 32.

Clemson took advantage. Harper passed to Aaron Kelly for 27 yards to the 4. Davis scored on a fourth-down plunge from the 1 to give Clemson a 17-10 lead.

The lead didn’t last long, as Auburn answered with a 70-yard touchdown drive, with Cox and Burns again alternating snaps. Cox ran for 8 yards on a third-and-6 play and passed to Robert Dunn for 18 yards on another third-down play. Burns ran for 15 yards to the 1, setting up a touchdown run by Ben Tate on the next play for a 17-17 tie with 8:27 left.