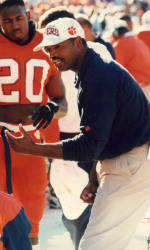 Harbison returns to Clemson after serving as the safeties coach at Mississippi State each of the last two years. He served as the defensive coordinator at Mississippi State this past season. He worked as Clemson defensive backs coach under Tommy West between 1995-97, and worked with Swinney at Alabama during the 1998-2000 seasons.

Harbison worked under Mississippi State coach Sylvester Croom for the 2007 and 2008 seasons. In 2007, his safeties helped the Bulldogs defense rank seventh in the nation in pass defense, allowing just 176 yards per game. The Bulldogs were also ranked 20th in pass efficiency defense and 21st in total defense.

That defense had a lot to do with Mississippi State’s eight-win season that included victories over Auburn, Alabama and rival Mississippi in addition to a bowl victory over Central Florida. After the season Harbison was elevated to defensive coordinator and he served in that role during the 2008 season. The Bulldogs ranked 20th in the nation in pass defense in 2008.

Harbison, 49, came to MSU following four years in his second tour of duty on the staff at the University of Alabama. He coached the Crimson Tide wide receivers during his most recent stint. The Crimson Tide played in the three bowls in those four years, including the 2006 Cotton Bowl.

During that four-year stretch, Harbison helped receivers D. J. Hall, Antonio Carter, and Triandos Luke rank among the school’s all-time top 10 pass-catchers. Two of Hall’s single-season receiving totals were among the top 10 in school history. Following the 2005 season, he was honored as one of the nation’s top 25 college football recruiters by Rivals.com.

Harbison coached the Crimson Tide defensive backs in his initial stay in Tuscaloosa from 1998-2000. He helped the Tide to appearances in the 1998 Music City and 2000 Orange Bowls during those three years. He was a part of the 1999 Alabama staff that won the Southeastern Conference Western Division title, and defeated Florida in the SEC Championship Game, leading to an Orange Bowl appearance. Two of his pupils, Fernando Bryant in 1999 and Tony Dixon in 2001 were taken in the first and second rounds, respectively, of the National Football League draft.

In between those two Alabama assignments, Harbison coached the defensive backfield at LSU in 2001 and ’02. He was a member of the Tiger coaching staff that directed the 2001 LSU team to an SEC Championship Game victory over Tennessee. During his two years, LSU played in the 2002 Sugar and 2003 Cotton Bowls. Corey Webster, who played under Harbison his first two years in Baton Rouge, finished his career second on the school’s all-time pass interception list.

Harbison served as the defensive backs coach at Clemson from 1995-97 and helped the Tigers to three consecutive bowl appearances. His 1995 defensive backs had four players who went on to play in the NFL. That list includes Brian Dawkins, who has gone on to a six-time Pro Bowl career with the Philadelphia Eagles. Dawkins’ six selections tie for the most among former Clemson players. Dawkins earned All-America honors in 1995 when he led the ACC in interceptions with six. He also coached Super Bowl Champion Dexter McCleon, first round draft choice Antwan Edwards, and former Washington Redskins safety Leomont Evans.

In addition to his collegiate coaching experience, Harbison worked in both the Arena Football League and the World League of American Football. His professional football coaching resume includes serving as defensive coordinator for the Charlotte Rage (1993).

A native of Shelby, N.C., Harbison graduated from Gardner-Webb College in 1995. A two-sport star in football and track on the college level, he was a free-agent signee of the Buffalo Bills following his senior season.