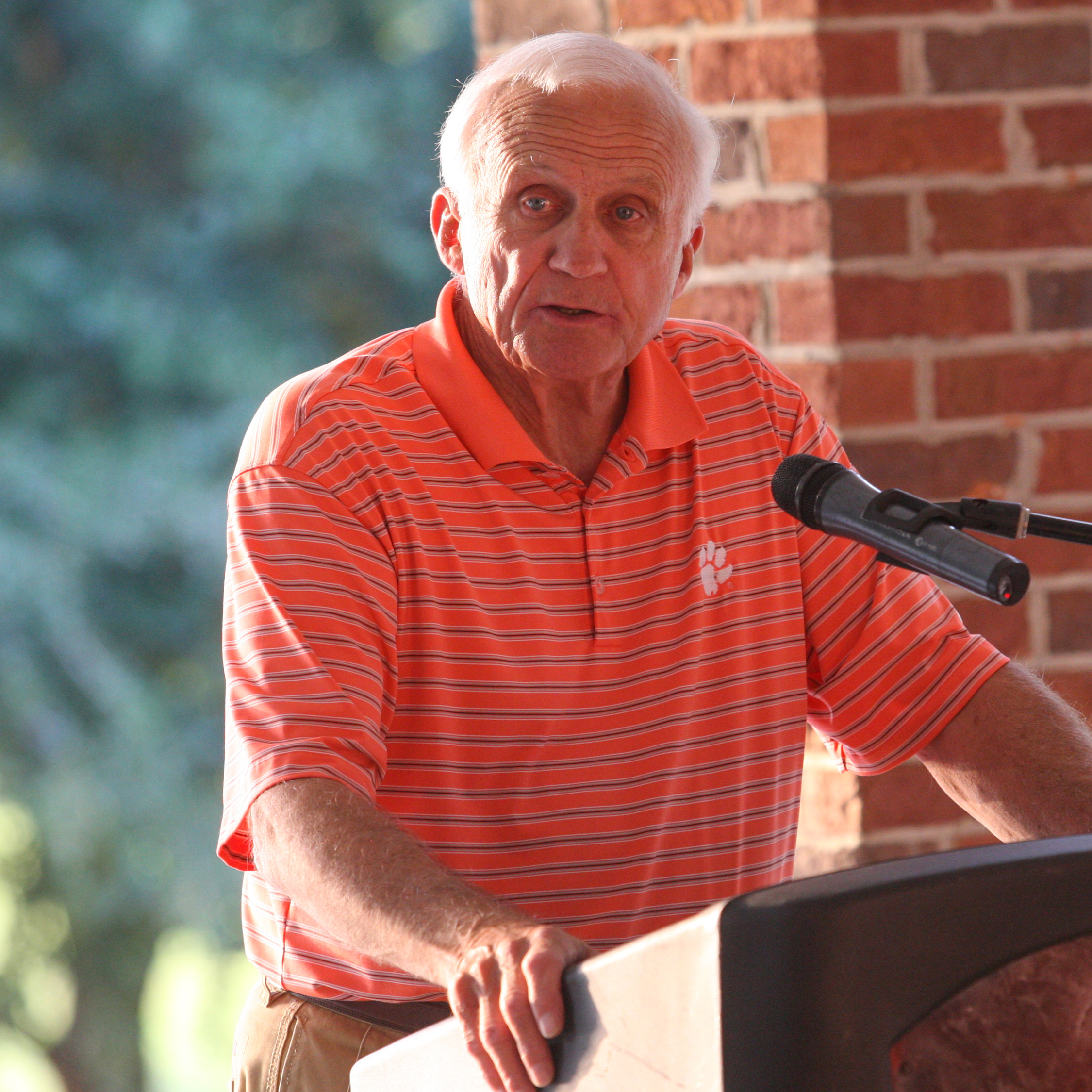 Upon learning of the deaths of Clemson backfield teammates Charlie Bussey and Jim Coleman a month apart this past spring, I could not help but remember the tremendous impact the two had in rejuvenating the Clemson teams of the mid 1950s.

They arrived on the Clemson campus in the fall of 1953 as all-state high school quarterbacks from Henderson, N.C., and Honea Path, S.C., respectively, one year after head coach Frank Howard discarded his longtime single-wing offense in favor of the more popular T-formation.

Howard felt blessed to have them choose to become the Tigers’ first legitimate quarterback recruits without engaging in a bidding war against other schools.

On the other hand, upon first meeting the 6’0”, 160-pound Bussey, Howard was reminded of his remarks upon first setting eyes on the great Banks McFadden when he was recruited in 1936 at 6’3” and 170 pounds.

“If you filled him with tomato juice, he’d look like a thermometer.”

As for Coleman, he wasn’t much bigger and had played for his father at relatively small Honea Path High School.

A third quarterback entered the picture shortly afterwards, Larry Frick of Dreher High School. He was not highly recruited, but came with halfback teammate Joel Wells, who was. Due to Clemson’s 1953 freshman class being ineligible for varsity ball (a national rule at the time) and being limited at the halfback position, Coleman unselfishly volunteered to play right halfback in what proved to be a very strong backfield.

Like McFadden, what Bussey and Coleman lacked in size, they more than made up with leadership and a will to win.

At quarterback, Bussey was expressive, evoking confidence in leading the Clemson freshmen in 1953. Then as backup to All-ACC signal-caller Don King at the start of the 1954 season, he was called upon to take over against an unranked Georgia team in Athens and the following week at home against Virginia Tech when King was sidelined after injuring his knee in the season opener against Presbyterian College. Both games were lost, with surprisingly tough Georgia Tech finishing the year ranked No. 16 in the AP poll.

Many of the Clemson naysayers were disappointed that Bussey had not led the Tigers to a pair of wins, but with No. 14 Florida coming up in Jacksonville the next week and King back in action, a degree of optimism prevailed despite the fact that the Gators had drubbed Clemson 54-13 just two years earlier in Gainesville.

King took over first-team duties, with Bussey relegated to his original spot as a backup on a team of backups that included Coleman. In a well-fought game won by the Tigers 14-7, Howard substituted complete teams that played both offense and defense, and the Bussey unit was credited with outplaying the starters.

This was good for the media to let them know who was playing, but trust me, Bussey and Coleman were never “B” players. While their first varsity season finished at 5-5, they helped the 1955 squad to a 7-3 record, again as leaders of the B-unit. That would have been a team that went to a good bowl by today’s standards.

In 1956, Bussey and Coleman rejoined Wells (All-ACC halfback in 1955), their freshman teammate on the first team, and along with rookie fullback Rudy Hayes, they led the Tigers to their first ACC title and second Orange Bowl appearance in the 1950s.

Bussey was named team captain and earned All-ACC honors along with Wells, who also made the All-America third team. Coleman trailed Wells and Hayes in total yards, but had a higher per-carry average (4.4) and did most of the punt returning with an 11.3-yard average.

In summation, the three years of varsity play by Bussey and Coleman contributed mightily to the Tigers compiling a 19-10-2 record while playing their toughest schedules up to that time. Ten teams were ranked in the top 20 either at the time of the game or at the end of the season, and four finished in the top 10.

Also, wins over South Carolina in 1955 and 1956 ended Clemson’s post-World War II’s decade drought (1-7-2) against the Gamecocks. Their three years together were a big reason Clemson finished the decade of the 1950s with the 15th-best winning percentage in the nation.

Though thin of physique in a day when weight training had not yet taken hold at most colleges, and oft with leg pads because of shin flints, Bussey never missed a game and Coleman only missed one. They were not particularly fast or rugged and did not pass all that well by today’s standards, but they always seemed to make key plays as needed.

Both exuded a love for the game that was contagious. They made their teammates better than they might otherwise have been. They were leaders on and off the field as their achievements upon graduation proved.

Both were commissioned officers in the Air Force, with Bussey becoming a jet pilot and instructor while still finding time to assist Air Force Academy coach Ben Martin during his time in Colorado Springs. On completing his military obligations, Bussey returned to his home in Henderson, N.C.

He ultimately became president of Laurens (S.C.) Glass. Later, he would return to his love for college athletics as Louisiana Tech’s athletic director before retiring at Clemson and serving as executive director of the Lettermen’s Association, an organization that both he and Coleman had previously led as president. Bussey is a member of Clemson’s Athletic Hall of Fame and previous recipient of the Alumni Association’s Distinguished Service Award.

Coleman had a varied and successful career in the textile industry in the Upstate, attaining the level of vice president of manufacturing for the Clinton Division of Clinton Mills Industries. Just as he found time to letter four times each in football, basketball, baseball and track at Honea Path High School, and also letter in baseball at Clemson, he was a volunteer and leader in the Presbyterian Church, YMCA, Clinton Friends & Economic Development Board, Meals on Wheels and United Ministries.

It has not seemed right not to have the smiling faces of Charlie Bussey and Jim Coleman greeting their many friends and former teammates this fall, something we have all been accustomed to most of the past 62 years.