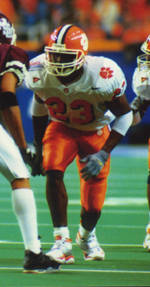 In 1996, after a stellar career as a quarterback at Raines High School in Jacksonville, Florida, a headline about Rod Gardner’s commitment to Clemson in the Greenville News read: “Florida QB picks Clemson.”

Today, after four years of hard work in the weight room and on the practice field, the senior Gardner is the first single season 1,000-yard receiver in Clemson history and is the top returning receiver in the ACC. Not a bad career for someone who has only played receiver for three years and who came to Clemson with the hopes of playing quarterback.

As a quarterback at Raines, Gardner passed for 1,200 yards, rushed for 700 yards, and accounted for 40 touchdowns during his final two seasons. As a senior, he was ranked as the seventh-best athlete in the southeast and was selected to Tom Leming’s All-Southeast team.

As dominant as he was on the gridiron, Gardner’s athletic ability translated into great success on the hardwood and on baseball diamond. He was a three year starter in both sports and was voted most valuable player in basketball his senior year. His resume from Raines looks even more impressive when you consider the fact that it is the same high school that produced former Clemson standouts and current NFL players Patrick Sapp and Brian Dawkins.

Because he has always been a very vocal leader both on and off the football field, Gardner’s soft side at home is often overlooked. His mother, Diane Sawyer, raised Gardner by herself until the sixth grade when she married Gardner’s stepdad, Charles. Gardner and his mom have always had a special bond and to this day she is involved with every aspect of his life.

“I love my mom to death, and you might even say that I am a mama’s boy,” said Gardner. “She comes to every home game and no matter what, she is always been there to support me.”

Gardner chose Clemson over Florida and Notre Dame because the Tigers promised him a chance to play quarterback. He was given the opportunity to play quarterback during fall practice his freshman year, but with Nealon Greene already solidified as the starter at that position, the coaching staff decided to red-shirt Gardner.

“Red-shirting was hard, but when I look back now I realize it was the best thing. I needed to mature both on and off the field,” recalled Gardner.

In the spring of 1997, Gardner was moved from quarterback to the secondary where he was the backup strong safety behind Antwan Edwards. Because he came to Clemson with the hopes of playing quarterback, the switch to defense was difficult. Gardner, just as he had done many times as child, turned to his mom for advice.

“I talked with my mom about it, and she told me just to stick it out and that things would work out,” said Gardner.

Before the start of the 1997 season Gardner was moved to receiver and in the seventh game of the season against Wake Forest, Clemson fans caught their first glimpse of a star in the making. With the Tigers holding on to a slim lead in the third quarter, Gardner’s dazzling 41-yard catch in the corner of the endzone helped seal a Clemson victory that Saturday at Groves Stadium. His catch would be the first of many circus catches registered by Gardner over his Clemson career. He went on to finish the 1997 season with seven catches for 74 yards.

After tallying 20 receptions in 1998, the 1999 season saw the emergence of Gardner as one the top receivers in the nation. His 80 total receptions broke the Clemson single season record previously held by Tony Horne (70). His 73 catches during the regular season led the ACC and were tied for the sixth-best single season total in league history. He was second in the league and 17th in the nation with 6.6 receptions per game and he set the Clemson single game record with 11 catches in the season opener against Marshall.

Even with all the accolades that accompanied his record-breaking season in 1999, Gardner’s big play ability and his breathtaking catches are what probably stand out most in the minds of Clemson fans. Against North Carolina last season, with the Tigers leading 24-17 in the third quarter, Gardner sprinted by Tar Heel cornerback Anthony Anderson and extended fully parallel to the ground to haul in a 31-yard pass from Woody Dantzler that appeared to be well overthrown.

“I knew I needed to make a big play, and there was no way I was going to let that ball hit the ground,” recalled Gardner.

Two weeks later, Gardner took his magic show on the road to Maryland where he came up with two eye-popping grabs that helped to jump start a stagnant Tiger offense. On one of the catches, Gardner went high into the air and out-muscled First-Team All-ACC defensive back Lewis Sanders for the ball.

“The defensive back had the ball, but Rod just went up and took it away from him. I could not believe it when I saw it. That was definitely the best catch I have ever seen Rod make,” said All-American linebacker Keith Adams.

Later in the season, Gardner’s fourth down touchdown reception late in the South Carolina game turned out to be one of the most important plays in Clemson’s turnaround of 1999.

At 6-foot-4 and weighing 215 pounds, Gardner’s size has always been his of most valuable asset as a receiver. It is Gardner’s work ethic, however, that separates him from other college players that possess the same physical attributes as him. Over his career at Clemson, his dedication in the weight room and on the practice field has translated to extraordinary success on Saturday afternoons. He has increased his bench press by over 100 pounds, his vertical jump by over three inches, and he has decreased his 40 time from 4.61 to 4.48.

“Rod is a tremendous leader in the weight room,” said assistant strength coach Tony Smith. “He always does more than we ask of him. If we ask him to do 10 repetitions of a certain exercise he will do 12. He gives us great effort everyday and he is always there to make sure that everyone else on the team is giving the same type of effort that he is.”

Besides dedicating himself to becoming a better football player, Gardner has made great strides in the classroom as well. Majoring in industrial education and scheduled to graduate in December, he was named most improved in the classroom for 1999.

“Over the past three years, Rod has really focused on his academic work and as a result his grade point average has risen tremendously over that period of time,” said Joe White, Clemson’s academic advisor for football. “We are very proud of Rod’s academic work and several faculty members within the university have even told me how pleased they are with his improvement in the classroom.”

Clemson receivers’ coach and recruiting coordinator, Rick Stockstill, is extremely proud of Gardner’s growth as a person and as a football player over his career.

“The biggest credit to Rod ever since he has been here is that he has been very focused on wanting to be a good football player. “For never playing receiver before he got here, he deserves a great deal of credit for how hard he has worked to develop his skills. It has been a real pleasure to coach Rod and to watch him grow as a person,” said Stockstill.”

Gardner needs just 55 catches to break Clemson record for total receptions in a career. He is preseason first-team All-ACC selection by many publications and is ranked by The Sporting News as the number-three candidate for the Biletnikoff Award, which is given annually to the nation’s best receiver. He is the top returning receiver in the league based on total receptions and Lindy’s magazine ranks him as the eighth most talented player in the ACC.

Looking back over his career at Clemson, Gardner can’t help but smile when he thinks about how his move to receiver has turned out.

“With all the good things that have happened to me over the past year, I would do it all over again exactly the same way,” recalled Gardner. “I have worked extremely hard to become the best football player I possibly can, and I am very fortunate with the way things have worked out.”

With all the success he and the entire Clemson team experienced last season, Rod Gardner’s move to receiver before the 1997 season now seems to have been a blessing in disguise. After reading the 1996 headline “Florida QB picks Tigers,” Tiger fans everywhere probably expected Gardner to follow in the footsteps of other great Clemson quarterbacks such as Homer Jordan and Steve Fuller. Now, as a star receiver, don’t be surprised to pick up a newspaper towards the end of the 2000 season and read the headline: “Gardner Breaks Clemson All-Time Receptions Record.”

What a difference four years of hard work can make.