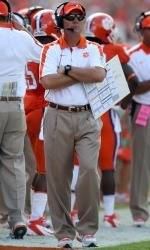 CLEMSON, SC – Chad Morris has agreed to a new contact to remain at Clemson as the football program’s offensive coordinator. The terms of the agreement will be released at a later date by Athletic Director Terry Don Phillips.

Morris took the Tigers to school records in terms of passing yardage, total yardage and scoring offense in his first year with program, helping the Tigers to a 10-3 record and ACC Championship. Clemson has improved its total offense by over 100 yards per game over last year and has improved from 88th in the nation to 29th. Clemson has also improved from 78th to 21st in passing offense.

The Tigers have a 1000-yard rusher (Andre Ellington) and a 1000-yard receiver (Sammy Watkins) for just the third time in school history, and quarterback Tajh Boyd has established school marks for passing yardage, touchdown passes, touchdown responsibility and total offense in a season.

He accomplished these statistics against a schedule that has included games against five top 25 teams, including two victories over Virginia Tech, who was ranked third by the USA Today entering the ACC Championship. That tied or the highest ranked team Clemson has beaten in its history.

“We have reached an agreement to stay at Clemson,” said Morris. “My wife Paula and our children, MacKenzie and Chandler, are very happy here. This is where we want to be. This is a place where people are passionate about football.

” I am excited about the future of this program. We have outstanding young players on this offense this year and I know we have some outstanding student-athletes who will be joining the program next year. We have a bright future and we feel we will continue to be one of the most explosive offenses in the nation.”