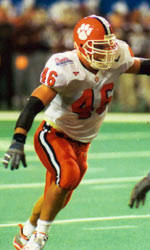 Leave A Question For Chad Carson

On Friday, Clemson senior linebacker and Butkus Award Candidate Chad Carson will be stopping by to chat with the fans about the Tigers and the upcoming battle with the Georgia Tech Yellow Jackets.

Carson, a two-time Academic All-American, was fourth in the nation last season in tackles with 13.27 per game. This season, as the leader of a young Tiger defense, Chad is off to another great start averaging over 10 tackles per game. However, sometimes Chad’s outstanding play on the field is overlooked by his remarkable accomplishments in the classroom. He enters his senior year with a 3.92 GPA in Biology and will be a Rhodes Scholar candidate in 2002.

This weekend’s game will mean more to Carson than about any other, as he travels to Georgia Tech to play in front of his hometown against a top ten opponent. Last year Chad was named Clemson’s Chevrolet Player of The Game by ABC against Georgia Tech in a game where he recorded 22 tackles. The Yellow Jackets have had the Tigers’ number since Chad has been at Clemson, winning all three games by 3 points in nail-biters. Last year’s loss was especially difficult to swallow as the Tigers’ perfect season was ruined with a Tech touchdown with :09 left on the clock. Chad wants to make sure his Tigers come out of Bobby Dodd with a W in his senior year.

Chad won’t hit the chat room until Friday at 10:15 a.m. ET. but feel free to drop him some questions now and we’ll save them for his arrival.

Leave A Question For Chad Carson