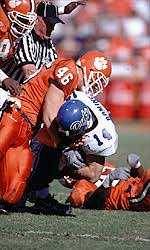 Chad Carson Is The Epitome of a College Student-Athlete

When thinking of a student-athlete, we sometimes overlook the student and instead focus on the athlete. Chad Carson, first team-middle linebacker, is the epitome of a college student-athlete. However, you don’t hear much about the Chad Carson’s of college football.

“He is an outstanding person on and off the field, a model person, and he is a great competitor in the classroom as well as on the field,” said Defensive Coordinator and Carson’s position coach Reggie Herring.

“For him to excel the way he does on and off the field is a true testimony to his character, maturity, and discipline.”

Carson, a member of Clemson’s outreach program LIFELine, attended Woodward Academy, a private school in Atlanta. Woodward is a college prep school that prepares high school students to go to college. “Everyone went to college from there,” says Carson. “Many people in my classes went to Ivy League schools.”

Attending a college prep school prepared Carson, a second-team academic All-American in 1999, for the challenges he would face attending a four-year university. His high school studying habits have carried over to his Clemson college career.

Being a student-athlete is not always an easy feat. However, for Carson, he has managed to crush the stereotype that is placed upon some athletes. In Carson’s two years as a Tiger, he has accumulated a 3.93 GPA in biology and also been a member of the ACC academic honor roll both years.

“Attending Woodward Academy prepared me for a rigorous academic schedule. In high school, I participated in almost every activity possible, which left me hardly any time at all. I got used to studying about an hour a day, putting it all into one slot of time, so I became accustomed to studying efficiently.”

Carson not only excels in academics, but on the field as well. He started playing football in the sixth grade. He would have started earlier, but his parents did not allow him to play before then.

In ninth grade, #46 decided he wanted to play college football. “I decided I was going to work as hard as I could to be a college football player and get a scholarship,” Carson said. Midway through his senior year he narrowed his choices to Georgia Tech and Clemson. “It was a hard decision because I had always been a Tech fan. The main thing was that Clemson had a really good football tradition. Clemson was a nice fit for me all around.”

When he arrived in Tiger Town, coaches were concerned with Carson’s development and how soon he would mold into the type of linebacker Clemson needed to be competitive. He worked extremely hard in the weight room and did the little things that it took to gain recognition from the Tiger coaching staff, including playing on many of the special teams.

Throughout Carson’s two seasons at Clemson he has proved to the coaches he can withstand the caliber of division I college football. During Carson’s freshman year, he played on special teams and 17 snaps at linebacker. He was a top special teams tackler with 10 stops. During his freshman season, Carson set his goals for the future.

“When I came here, I had a goal to play special teams my freshman year and work my way into a starting role my sophomore season. I figured I could get used to college ball my first year and then I would be ready to become a starter by my second season.”

Last season, Carson went from a special teams player who played only 17 snaps at linebacker to a starter who finished third in the ACC with 144 tackles.

“I was thrown in the fire in ’99, but it was a good opportunity because it forced me to become experienced fast.”

And Carson did grow up, faster than many thought he could. Many sophomores have been known to be starters, but most true sophomores don’t have the experience to gain a starting role because of the inexperience factor, especially at tradition-rich Clemson, which has produced some of the top linebackers in the NFL in recent decades.

“You can see him improve each day,” Herring said. “There is no doubt that he is establishing himself as a solid, productive football player at this level. He has taken on the demands and pressures put on him to become a tough, hard-nosed individual.”

Carson grew up fast along with fellow linebacker Keith Adams. Adams and Carson both had breakout sophomore seasons a year ago. Carson recorded the 10th highest single-season total for tackles in Clemson history. However, the figure did not receive that much attention in light of Adams’ record-breaking 186 for the season.

“All of the linebackers are close like a family and the team chemistry makes playing a lot better,” Carson said. “If the other linebackers received all of the accolades for the season, I would be happy for them.”

His attitude tells coaches, teammates, and fans alike a lot about his character. “I feel like I could be a labeled as a guy other players can lean on and depend on to makes all the calls and keep everyone straight. I like to think I am someone everyone on the team can depend on.”

Carson opened the season proving he can be depended upon. With career best 18 tackles (eight primary and 10 assists), he led the team in tackles in the opener Sept. 2 against The Citadel.

Carson is considered the prototype of what you would want a college student-athlete to be. He has a bright future ahead of him at Clemson and hopefully in the future we will hear more about the Chad Carson’s of college football.