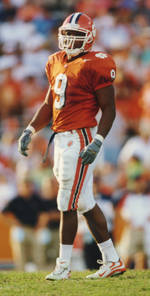 Oklahoma City, OK – Clemson safety Robert Carswell is one of 40 players named to this year’s preseason watch list for the Jim Thorpe Award. The Thorpe Award has been presented annually since 1986 to the best defensive back in college football.

A native of Stone Mountain, GA, Carswell needs just 13 tackles to break Terry Kinard’s Clemson record for tackles by a defensive back. He has 282 heading into this season. A year ago, Carswell had six interceptions to rank in a tie for 10th in the nation.