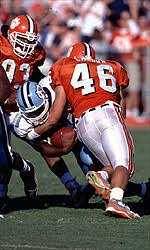 Clemson, SC – Clemson senior Chad Carson is one of 69 linebackers named to the preseason list of candidates for the 2001 Dick Butkus Award. The list was announced on Thursday. The honor goes to the top linebacker in the nation and it will be presented Friday, December 7th in Orlando. Clemson linebacker Keith Adams, now with the Tennessee Titans of the NFL, was one of three finalists for the award last year.

Carson is one of six ACC players on the list. The others are LeVar Fisher of NC State, Bradley Jennings of Florida State, Kendyll Pope of Florida State, Aaron Thompson of Maryland and Ricardo Wimbush of Georgia Tech.

Carson is also a model of consistency in the classroom. A Rhodes Scholar candidate, the native of Newnan, GA has a 3.94 career GPA in biological sciences. He was named permanent captain of the Clemson defense as a junior in 2000. He was named a first-team Academic All-American in 2000 after being selected as a second-team Academic All-American in 1999.