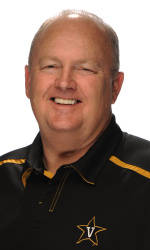 “Brad Scott in a number of ways and it should be a good transition for our players. It is a good time for a change from the standpoint that we have four returning starters in the offensive line.

“Robbie is one of the most respected coaches in the business. He is a proven offensive line coach and recruiter. He has 30 years of coaching experience and has developed some outstanding players over the years.

“He is a native of South Carolina who had a great career as a player and a coach at Furman. He knows this state and will be an asset to us in recruiting this area. We are pleased to have him join our staff.”

A native of Pageland, SC, Caldwell is a 1977 graduate of Furman University in Greenville, SC. As a player he lettered three years under Art Baker, including his senior season of 1975 when he earned Furman’s MVP Award and was named the offensive captain.

Caldwell started his coaching career as a graduate assistant under Baker in 1976 and he became a full-time offensive line coach with the Paladins under Dick Sheridan in 1978. He served under Sheridan for eight years (1978-85) and Furman won six conference championships during that era. Caldwell coached eight first-team all-conference players and five recipients of the Jacobs Blocking Trophy, which is given each year to the top offensive lineman in the Southern Conference.

Caldwell moved with Sheridan to NC State for the 1986 season. He was part of a resurgence of NC State football as he helped Sheridan turn the 3-8 team of 1985, into an 8-3-1 club that beat three AP Top 25 teams.

NC State had three top 25 finishes in the AP poll between 1991 and 1994, including a 17th place finish in 1992 thanks to a 9-3-1 record. That team featured a rushing offense that averaged over 200 yards per game. Caldwell worked for Sheridan and Clemson graduate Mike O’Cain during his 14 years in Raleigh, and the Pack posted 10 winning seasons and went to nine bowl games.

Caldwell coached the Wolfpack offensive line for 11 years, then added assistant head coaching responsibilities for his final three years. Fourteen of his players at NC State were All-ACC selections.

Caldwell coached at North Carolina during the 2000 and 2001 seasons. The 2001 Tar Heels team won eight games, including a 16-10 Peach Bowl victory over Auburn.

Caldwell joined Clemson graduate Bobby Johnson’s staff at Vanderbilt in 2002. He coached some of the top offensive lineman in Vanderbilt history during his nine years with the program.

The list includes Chris Williams, who developed into an All-SEC performer as a senior in 2007. He became the highest offensive lineman draft choice in Vanderbilt history when he was chosen as the 14th selection of the Chicago Bears. He helped the Bears to the NFC Championship game this year. Overall, five of his former players have earned All-America honors and seven have been drafted into the NFL.

Caldwell was part of the 2008 Vanderbilt staff that guided the Commodores to the program’s first winning season and bowl victory in 26 years. That year Vanderbilt defeated South Carolina, Auburn and Boston College.