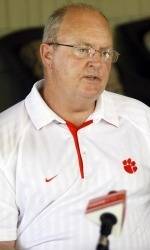 CLEMSON, SC – This time last year, Robbie Caldwell was the star of SEC Media Days in Birmingham, AL. The veteran coach, who has coached offensive lines for more than 30 years, charmed the media with his quick wit and his wonderful sense of humor.

Just days before the news conferences, Caldwell’s long-time friend and colleague, Bobby Johnson, retired as head coach at Vanderbilt. The university made Caldwell the Interim Head Coach for the 2010 season, and the next thing Caldwell knew, he had people he had never met before in his nine seasons in Nashville, TN coming at him from every direction.

“I just got the job, and those people up there were running around and scared to death,” he said laughing. “They were trying to school me up on what to do and how to do it. I said, `Boys you can’t worry about it. I’m not smart enough to handle all of this so I will go do what I do.

It was fun, for a little while, anyway. Caldwell captivated the media the whole week in Birmingham, but at the end of the season, Caldwell and the rest of the staff were let go.

“That was kind of sprung on me last year, but I really appreciated the opportunity to do it,” Caldwell said earlier this week. “I enjoyed my time, but I really missed the coaching aspect of it. If you go and ask Coach (Dabo) Swinney, that will be the one thing he misses the most.

“Coaching a position, there is just something about it,” he continued. “That has been planted in me for years. Sometimes if you are not careful, you get what you wish for. I really enjoyed being a head coach, and who knows, maybe one day I’ll do it again. But, I’m extremely happy to be right here coaching the offensive line. I feel like that is my calling.”

Vanderbilt’s loss is definitely Clemson’s gain. A Tiger fan growing up in his hometown of Pageland, SC, Caldwell lettered three seasons at Furman before starting his coach career with the Paladins under the leadership of Art Baker in 1976. He became a fulltime offensive line coach under Dick Sheridan in 1978 and remained in that position at Furman until he went with Sheridan to NC State in 1986.

Caldwell stayed at NC State through the 1999 season and then spent the 2000 and 2001 seasons at North Carolina before following Johnson to Vanderbilt in 2002.

In his 33 years as a coach, he has coached 28 all-conference and All-America players, including seven that were drafted into the NFL. Included in that list is Chicago Bears offensive lineman Chris Williams, who was an All-SEC performer for Vanderbilt in 2007. Williams was selected at No. 14 in the 2008 NFL Draft, and was a starter for the Bears during their run last season to the NFC Championship game.

“It has been a lot more fun and a lot less of a headache,” said Caldwell about being a position coach. “It is something I really enjoy. I like to think I have been a loyal assistant for 30-some-odd years, and I have loved every minute of it.”

“Coach (Caldwell) is so much fun to work with,” Freeman said. “He brings such a positive attitude with the way he approaches things. It has been a good change of pace for us. He and Coach (Brad) Scott are a lot alike, but sometimes it is good to bring in a new face, and get a different perspective on things a little.

“I think he has been a great addition to all of us, and I can’t wait to see how he makes all of us better.”

Caldwell says former offensive line coach Brad Scott did a great job assembling this year’s offensive line, as well as coaching them. Despite being their new coach, while also learning Chad Morris’ new and fast-paced offense, he feels the unit as a whole has not missed a beat.

“They kind of sensed (what they needed to do), and it took care of itself,” he said. “I think in the long run, the fast pace is a lot easier for an offensive lineman. We don’t have to huddle. We don’t have to run back and forth. We get up there, and we are waiting. We are ready to go. I think sometimes that is overrated when people talk about it. I know when I played I always hated trotting from the huddle to the line.”

Caldwell really likes Morris’ approach on offense and the ways in which he attacks a defense’s weaknesses. After experiencing a variation of the offense at Vanderbilt, Caldwell likes to think he can maybe help a little bit here and there.

“He certainly knows a lot more about it than what we were trying to do with it,” Caldwell said. “We went to something probably prematurely. At one time we had a lot of receivers, and then all of sudden we switch to this, and all of them got hurt. We did not have anything on the perimeter so it was pretty difficult.

“(Morris) has a great plan,” he continued. “The different approaches he has in the offense to attack a defense is very refreshing. I feel like I have something to add to it with my experience.”

But, if there is anything Caldwell adds besides his coaching, it’s his charm and charisma.