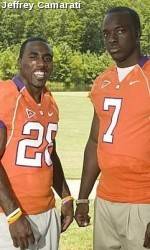 Any regrets so far about coming back for your senior year? “No, none at all. I am not the type of person who look backwards. I made this decision because I wanted to come back and get my degree and have a great season with my teammates. I just want to help Clemson win football games this year, I am just looking forward.

“I am more of a leader this year. That is because I am a senior. I haven’t been that vocal previously, but I will this year. “

Who is faster, you or Jacoby Ford? “We are both fast. He had a great year in track winning a national championship in the indoor season. We can both help each other with our speed and help the team win, that is the main thing. We can spread out the defense because they have to respect our speed. He is really a terrific player and I look for Jacoby to have a big year this year.

On Being Promoted for the Heisman “It has been fun. There has been a lot of interest in the poster. But, I know that the race for the Heisman is as much a team thing as anything. You have to have a great season as a team to be considered. So, that is my first priority to do whatever I can do to help the team win and the rest will take care of itself.

” I really don’t and won’t follow who the other candidates are. I know there are two returning Heisman Trophy winners in Bradford and Tebow, and they will have a lot of attention. But, I can’t get involved in that when it comes to the individual part. “

Talk About Clemson’s Fan Support “I wanted to come back to get my degree and to play another year with my teammates, but the Clemson fan base was a factor as well. Really they are second to none. There is nothing like playing in Death Valley. I wanted to play there another year.”

On Coach Dabo Swinney “Coach Swinney is a great guy. He recruited me to Clemson and I wanted to play my last year for him. A smile came to his face when I told him I was coming back. He is a great coach and is going to do very well at Clemson. He brings a lot of energy who motivates us to give great effort. He centers in on the little things. Run on and off the practice field every day. If you do the little things right it will carry on to game day.

Goals for this Team “In order to achieve something you have to believe you can do it. Coach Swinney is doing a great job in getting us to believe in ourselves.

“If we work hard we can achieve a great deal this year. Obviously we want to get to the ACC Championship, which we haven’t done yet. But, we don’t talk a lot about it because we know we have to go out and work hard in this league because it is such a competitive league. “

On the Offensive Line “We have the offensive line to get the job done this year. We have everyone back from last year. They are all more mature. The communication will be much better this year because they will be more experienced. Playing the offensive line as a unit is so important.

“Thomas Austin is one of the best offensive linemen in the nation and he will be a team leader this year. We just need to stay healthy so they can play as a unit.

On Being the Every Down Guy “This is my last year and I want to do everything I can to help the team win. That means running the ball, catching passes and the return game. I know I will get more opportunities with James Davis gone, but we have a lot of other options on offense as well. Jamie Harper are talented players who are capable of taking it to the house any time. And, whoever the quarterback, whether it be Willy Korn or Kyle Parker, they can make plays.

You will be in the national spotlight in the second game against Georgia Tech, how will you prepare for that game? “All our focus right now is on Middle Tennessee, our first game. Then we will have to play at Georgia Tech in the second game on just five days rest. That will be a great challenge, because they are an outstanding team. It will be a big challenge for our defense. No matter what happens in the opener against Middle Tennessee, we will have to forget about it and prepare for Tech.