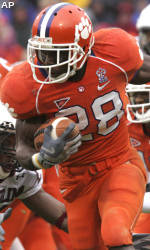 Clemson, SC – Clemson running back C.J. Spiller is one of 55 players on the “Watch List” for the 2009 Maxwell Award, which is presented to the Outstanding Player in College Football, Maxwell Football Club President Ron Jaworski announced.

Spiller was named to the Walter Camp Watch List and the Doak Walker Award watch list earlier this month. The senior from Lake Butler, FL was a first-team All-ACC selection last year on the field and in the classroom, the first running back in Clemson history to make both teams in the same year.

Spiller led the ACC in all-purpose running last year with 1,770 yards and he needs just 921 to become the ACC’s all-time leader in that category. He has 30 career touchdowns and 2,335 career rushing yards, tops among active ACC players. The 2009 Heisman Trophy candidate has a school record 12 touchdowns of 50 yards or more, including seven that are from 80 yards or more.

The Maxwell Award has been presented to the outstanding collegiate football player in America since 1937 and is named in honor of Robert W. “Tiny” Maxwell. The Maxwell Football Club, founded in 1935, is based in Philadelphia, Pennsylvania and is the oldest football club in the United States.