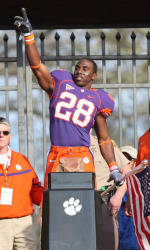 GREENSBORO, NC – Clemson’s C.J. Spiller, whose dynamic contributions have helped elevate the Tigers to a spot in the ACC championship game, has been named the conference’s Player of the Year in voting by the Atlantic Coast Sports Media Association.

Spiller, a running back and kick returner from Lake Butler, Fla., received 29 of the 40 votes cast and outdistanced Georgia Tech quarterback Josh Nesbitt for the honor, which he will receive on Friday in Tampa, Fla. The Tigers will seek their first ACC championship in 18 years when they face Georgia Tech on Saturday at Raymond James Stadium.

The 5-foot-11 senior, who set the ACC’s career record for all-purpose yardage in October, is defined by a collection of skills rather than a niche:

 He is the only player in the NCAA’s Football Bowl Subdivision with at least one touchdown in each of his team’s games.

 He has returned four kickoffs for touchdowns, one short of the NCAA’s single-season record, and he has done it on only 18 attempts. Ashlan Davis had 37 kickoff returns when setting the TD record of five in 2004. (On average, about one kickoff return in 50 goes the distance nationwide.)

 In all, he has scored nine touchdowns of 56 or more yards. They have come by every standard offensive means (rushing, receiving and returns of punts and kickoffs.) He also threw a TD pass.

 Spiller ran for 112 yards against TCU on Sept. 26. That surpassed the total gained by nine of the other 11 teams to play the Horned Frogs this season.

Spiller is the only player in NCAA history with at least 3,200 rushing yards, 1,600 yards in kickoff returns, 1,000 yards on receptions and 500 yards on punt returns. He’ll enter the ACC championship game with 7,115 all-purpose yards, a total good for fifth in NCAA history. If he maintains his per-game average of 183.92 in that wide-ranging category, he’ll finish third at 7,438.

Spiller was at his best in two highly anticipated and pivotal games this season.

At eighth-ranked Miami on Oct. 24, he scored on a 90-yard kickoff return and a 56-yard pass from Kyle Parker in the Tigers’ compelling 40-37 overtime victory, which secured their position atop the ACC’s Atlantic Division standings. The result snapped an eight-game losing streak to ranked opponents and an eight-game skid in games decided by five or fewer points. It was also the program’s best road win – as measured by the opponent’s AP ranking – since a 10-8 victory at No. 8 North Carolina in the Tigers’ national championship season of 1981.

Two weeks after the Tigers beat Miami, they hosted a resurgent Florida State team. Spiller kept the Tigers in control with 312 all-purpose yards, 165 of which came in rushing.

In five games against Atlantic opposition, he averaged 197 all-purpose yards and six yards per rush.

The Atlantic Coast Sports Media Association is an organization of professional journalists that strives to foster mutually beneficial relationships between the media, the ACC’s administration and the conference’s 12 member institutions. The group casts the official, conference-recognized voting for individual honors in football and men’s basketball. It also selects the league’s outstanding male and female athlete regardless of sport; honors a coach, athlete or administrator for distinctive courage and spirit; and pays tribute to outstanding reporting by or service to the media of the ACC region.