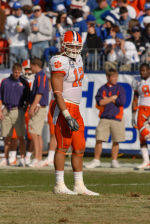 “I want to thank all the people at Clemson for the help they have given me the last four years,” said Gaddis. “I especially appreciate my teammates and coaches, in particular Coach Tommy Bowden and my position coach the last two years, Vic Koenning. This is the best decision for me. I have thought about it for a long time and I am comfortable with the decision.

“It is important for me to get my degree from Clemson. I have only 19 hours. I will be back to finish up.”

Gaddis started 11 of Clemson’s 13 games this season and had 33 tackles, including 8.5 tackles for loss. He had two interceptions, including one against South Carolina in the regular season finale. Gaddis had five passes defensed and 25 individual tackles. His top game came at Wake Forest when he had a season high six tackles, including four tackles for loss. The four tackles for loss were a Clemson record for a Tiger defensive back. He also had an interception on Wake Forest’s final drive that clinched Clemson’s 27-17 win over the eventual ACC Champions. Gaddis was a big reason Clemson ranked in the top 20 this season in total defense, pass efficiency defense and scoring defense.

Gaddis had 59 tackles as a safety in 2005 when he helped the Tigers to an 8-4 season and a top 25 finish in the final polls. He had three consecutive double figure tackle games early in that season against Maryland, Miami (FL) and Boston College.

Gaddis finished his career with 35 games played and 16 starts. He had 113 career tackles, including 13.5 tackles for loss and five interceptions. He also forced four fumbles, including two in 2006. As a sophomore in 2005 he had a streak of three consecutive games with an interception as a non-starter in wins over Duke, Florida State and South Carolina.

Gaddis came to Clemson as a quarterback from Raeford, NC, but his family now lives in Virginia.

“I feel C.J. Gaddis would have benefited by returning for his senior year just as Tommy Bowden. “He had a fine career here and we wish him well in his pursuit of a professional career.”