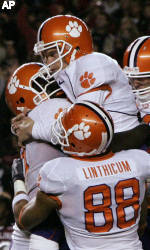 COLUMBIA, S.C. (AP) — Mark Buchholz hit a 35-yard field as time expired to give No. 21 Clemson a 23-21 victory over South Carolina and leave Gamecocks coach Steve Spurrier with the longest losing streak of his college career.

Buchholz, who starred on the Tiger soccer team this fall, had missed two earlier field-goal attempts. But he nailed the one that counted most and his teammates leaped in celebration at Williams-Brice Stadium.

For Spurrier and South Carolina (6-6), the defeat was their fifth straight, and it leaves the Gamecocks with precarious postseason hopes.

A month ago, South Carolina seemed a sure bet at the postseason at 6-1 and No. 6 in the country.

The Gamecocks looked ready to end the skid in this one, overcoming Clemson’s 17-7 lead to go ahead 21-20 with 9 minutes left on the last of Blake Mitchell’s three TD throws.

However, Clemson quarterback Cullen Harper guided the Tigers into position. He found Aaron Kelly with a 12-yard pass on fourth-and-4. The two connected again moments later on an 18-yard pass to South Carolina’s 16.

That’s when Buchholz calmly hit the game-winner. A week ago, Buchholz was short on a 54-yarder at the end that would’ve tied things in the Tigers’ 20-17 loss to Boston College that cost them a chance at the Atlantic Coast Conference title.