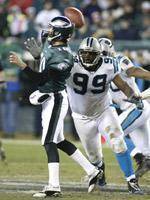 Former Clemson All-ACC defensive tackle Brentson Buckner will provide color commentary for the CSS television network on Clemson’s Spring Football Game on Saturday, April 8. The contest will be broadcast this Saturday at 2:00 PM from Clemson Memorial Stadium on a one-hour delay basis. CSS will also rebroadcast the game throughout the spring and summer. The actual kickoff for the game at Death Valley is 1:00 PM.

CSS is a sports cable network that highlights college athletic contests in the Southeastern portion of the United States. It is available on cable systems in South Carolina, Florida, Georgia, Alabama, and Mississippi.

This will be Buckner’s first game as a television analyst. The 12-year NFL veteran had 43 tackles this past season for the Carolina Panthers, helping that franchise reach the NFC Championship game for the second time in three seasons. He also started in the Super Bowl for Pittsburgh at the end of the 1995 season and for Carolina at the end of the 2003 season.

Buckner was a first-team All-ACC defensive tackle in 1992 and 1993. He was the 50th selection of the 1994 NFL draft by the Pittsburgh Steelers. He finished his Clemson career with 22 sacks and 46 tackles for loss, and both still rank in the top 10 in Clemson history. He was also a starter on Clemson’s 1991 ACC Championship team that led the nation in rushing defense.

This past season, Buckner also served on the voting panel for the Harris Poll, which was one of the polls used by the BCS to determine the teams that played in the major bowl games at the conclusion of the 2005 season.

Buckner will work Saturday’s game with Fred Cunningham, who provides play-play commentary on the replay of Clemson football games throughout the fall of CSS. He is also a morning news anchor for WSPA TV in Spartanburg.