Senior B.T. Potter walks around carrying the weight of each game on his shoulders, but the cool, calm and collected South Carolina native never lets it show.

Growing up as a kid in Rock Hill, S.C., Potter was an elite soccer player, as he played for a well-known soccer club until high school. He was introduced to football in elementary school, where he played offensive line.

“My parents would not let me quit, so I had to push through the year,” recalled Potter during a game when it was 50 degrees.

But as an elementary school kid, Potter thought it was sub-zero temperatures.

Before the game, Potter asked his father for a pair of gloves to wear. His father laughed and said, “You don’t need no gloves.”

“I go out there and I’m playing defense, the quarterback throws one over my head and I got my fingers on it and dropped it. To this day, I give my dad a hard time about that.”

Potter was reintroduced to the gridiron in eighth grade thanks to his brother, who was a punter. He was approached by the football coach at his middle school, who knew he was an all-around athlete and possessed a cannon for a leg.

He balanced playing club soccer and middle school football. He would go from practice to practice all week. Potter knew he had to pick one sport, and Clemson is lucky with the choice.

“I really liked football more and knew it could take me further in life.”

Potter was introduced to Clemson at a young age, as his father is a native of nearby Iva, S.C.

“I knew that if they gave me the opportunity, I would come here.”

Potter is honored to be listed next to great Clemson placekickers like Chandler Catanzaro, as he tries to carry on the tradition at the position.

“It is definitely special growing up here in South Carolina as a kicker. We all looked up to Chandler and everyone wanted to be him. It is crazy to even be in the same conversation as him.”

Potter reminisced on his favorite field goals at Clemson. Two stood out the most.

“I’ll never forget Notre Dame when I was 4-4 on field goals in a one-possession game. And in the LSU game, I was coming off a rough 2019 regular season, and it was good to end on a good note.”

Potter was quick to give credit to his long snapper, Jack Maddox, and holder, Will Swinney, who have helped him during his college career.

“I definitely trust those guys. They have never done me wrong. I love those guys. Very few people give credit to Jack, and the same thing with Will. I really appreciate those guys.”

Football fans are always curious how a practice looks for a kicker. Potter said it has changed a lot for him over the years.

“As I have matured, it looks a lot different. I try to practice with purpose, because my confidence from Saturday comes from what I do during the week. So if I build that confidence in practice, I can help my team win on Saturdays.”

Potter has had a strong career at Clemson. He owns the school record for consecutive PATs made (122), but his biggest accomplishment at Clemson was applying for graduation in August.

“Growing up, I wasn’t sure I wanted to go to college…I dreamed of being a stay-at-home dad since sixth grade. Graduating from college is big. Obviously, winning a national championship is cool, but a college degree really changes what I can do outside of football.”

Potter never takes for granted the opportunity to play at Clemson and for Head Coach Dabo Swinney, because he knows it is fleeting.

“Coach Swinney gives us a lot of good stuff we can use outside of football. As a sophomore, I matured a lot as a person, so I began to take notes and really listen to what he was teaching. It hit me that one day I am not going to be at Clemson, and I need to be prepared for that.”

One lesson that he has taught Potter is the importance of a positive attitude.

“Every day, I wake up and try to have a good attitude. You cannot do anything with a bad attitude. I try to start every day with positivity.”

Potter was not shy to talk about his goals for himself and the team. His answer was a great refresher of the importance of college athletics after the year the world just lived through.

“My goal is to have fun, and everything else will fall in line,” added Potter. “After the 2019 season, I was drained and was not having fun. During my junior year in 2020, I had a lot of fun and I was not stressed. This year, I just want to enjoy football.

“As a team, it would be nice to win another national championship, but I really just want us to reach our full potential in 2021.” 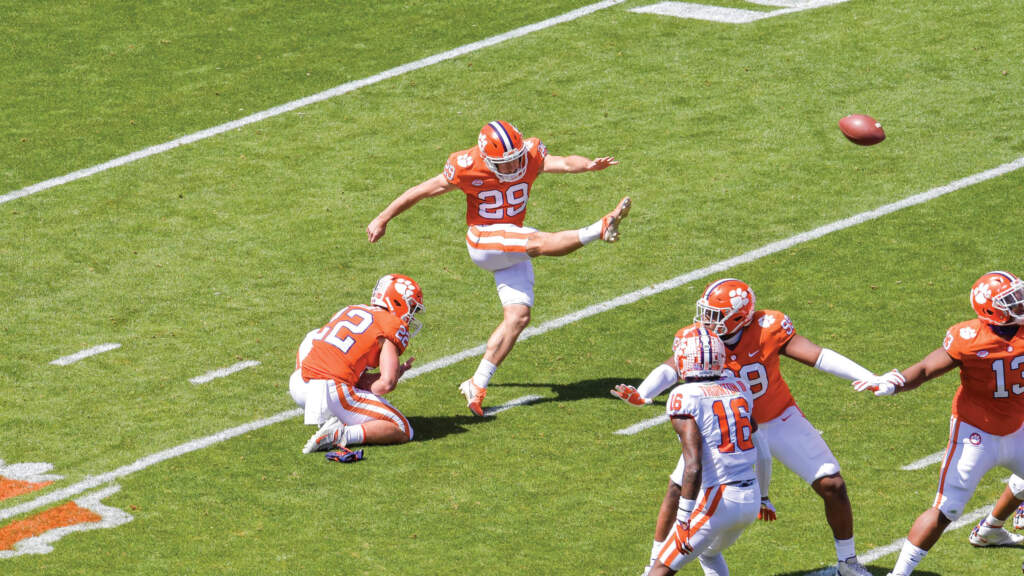