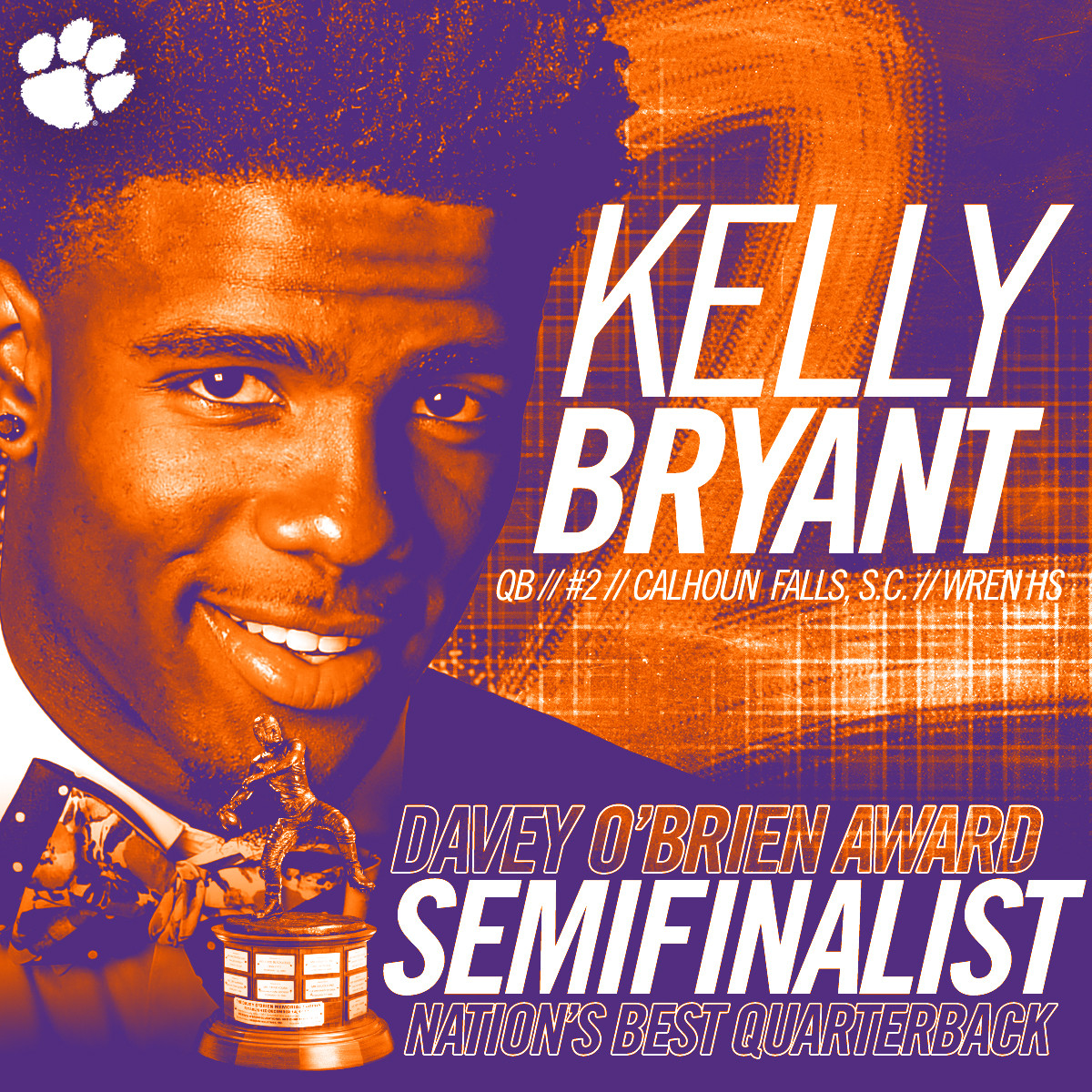 FORT WORTH, Texas—Clemson quarterback Kelly Bryant is one of 16 semifinalists for the 2017 Davey O’Brien Award. The honor is presented each year to the nation’s top quarterback. Former Clemson quarterback Deshaun Watson won the honor each of the last two years.

Bryant has led Clemson to an 8-1 record and a No. 4 national ranking in both polls.   The Tigers have four wins over AP top 20 teams so far, including three away from home, the only team in the nation that can make both claims. Bryant has completed 65 percent of his passes for 1773 yards and seven touchdowns and is also Clemson’s top rusher with 548 yards in 133 attempts and nine touchdowns.

The collection of semifinalists is comprised of seven seniors, five juniors and four sophomores. Schools from six conference affiliations (ACC, American, Big Ten, Big 12, Pac-12 and SEC) make up the list. The Big 12 and Pac-12 lead the way with four apiece.

Of the nominees, 11 were named to the preseason watch list in July. In addition, the group has earned Davey O’Brien “Great 8” weekly honors a total of 31 times this season and collected seven National Quarterback of the Week accolades.

The Davey O’Brien Fan Vote counts as five percent during each round of the voting process, and is combined with the results from the Foundation’s national selection committee, which is comprised of journalists, broadcasters, commentators and former winners.

After clearing the first round totals, the Fan Vote at VoteOBrien.org will reopen today (Nov. 7) and remain open until noon (CT) on Sunday, Nov. 19, for the second round of balloting. Fans are invited to cast their vote for the nation’s best college quarterback as often as once daily per email address.

In conjunction with ESPN, the Davey O’Brien Foundation and the Selection Committee will release the names of the three finalists on Monday, Nov. 20. The 2017 Davey O’Brien winner will be announced live on The Home Depot College Football Awards Thursday, Dec. 7.