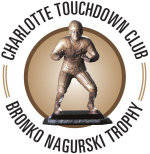 DALLAS, TX – Clemson defensive end Kourtnei Brown has been named the FWAA/Bronko Nagurski National Defensive Player of the Week for games of the weekend of Oct. 22. Brown, a 6-6, 255-pound senior from Charlotte, NC, scored two touchdowns – one by interception return and one by fumble return – in Clemson’s 59-38 victory over North Carolina. In the second quarter, Brown made a leaping interception and returned it 20 yards for a touchdown to give Clemson a 24-10 lead and picked up a fumble and ran 26 yards for a score late in the third quarter.

Brown’s feats made him the first Clemson defensive player since 1954 to score two touchdowns in the same game. He is also only the third FBS player to score touchdowns by interception return and fumble return in the same game in the last 12 years. He also recorded two tackles and a pass break-up on the day.

Each week during the 2011 season the FWAA All-America Committee has selected a national defensive player of the week from nominations made by the 11 Division I Bowl Subdivision Conferences and major independents.