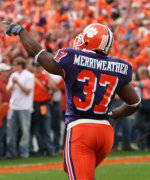 Due to the addition of the Clemson vs. South Carolina game to the live ESPN 2 schedule this Saturday, the broadcast of the game in Littlejohn Coliseum has been cancelled.

“We had planned on showing the broadcast of the game in Littlejohn free of charge to the public when it was only going to be offered on a pay-per-view basis,” said Clemson Athletic Director Terry Don Phillips. “I want to point out that the University of South Carolina was going to allow us to show the game at no cost to us and we are very appreciative of their efforts to allow our fans in the upstate the opportunity to see the game free of charge.

“We would like to thank the University of South Carolina, Athletic Director Eric Hyman and the Southeastern Conference for their work in adding the Clemson vs. South Carolina game to the ESPN2 live schedule this Saturday.

“Our athletic management team worked in concert with the administration at Littlejohn Coliseum to put on the event and we appreciate all of their efforts as well. This is something we could possible do in the future with more advanced planning.

“But, with the game now on ESPN2 in the state and available on DirecTV, the Dish Network, and ESPN Gameplan all over the country, it is no longer practical to show the game in Littlejohn Coliseum this Saturday.”