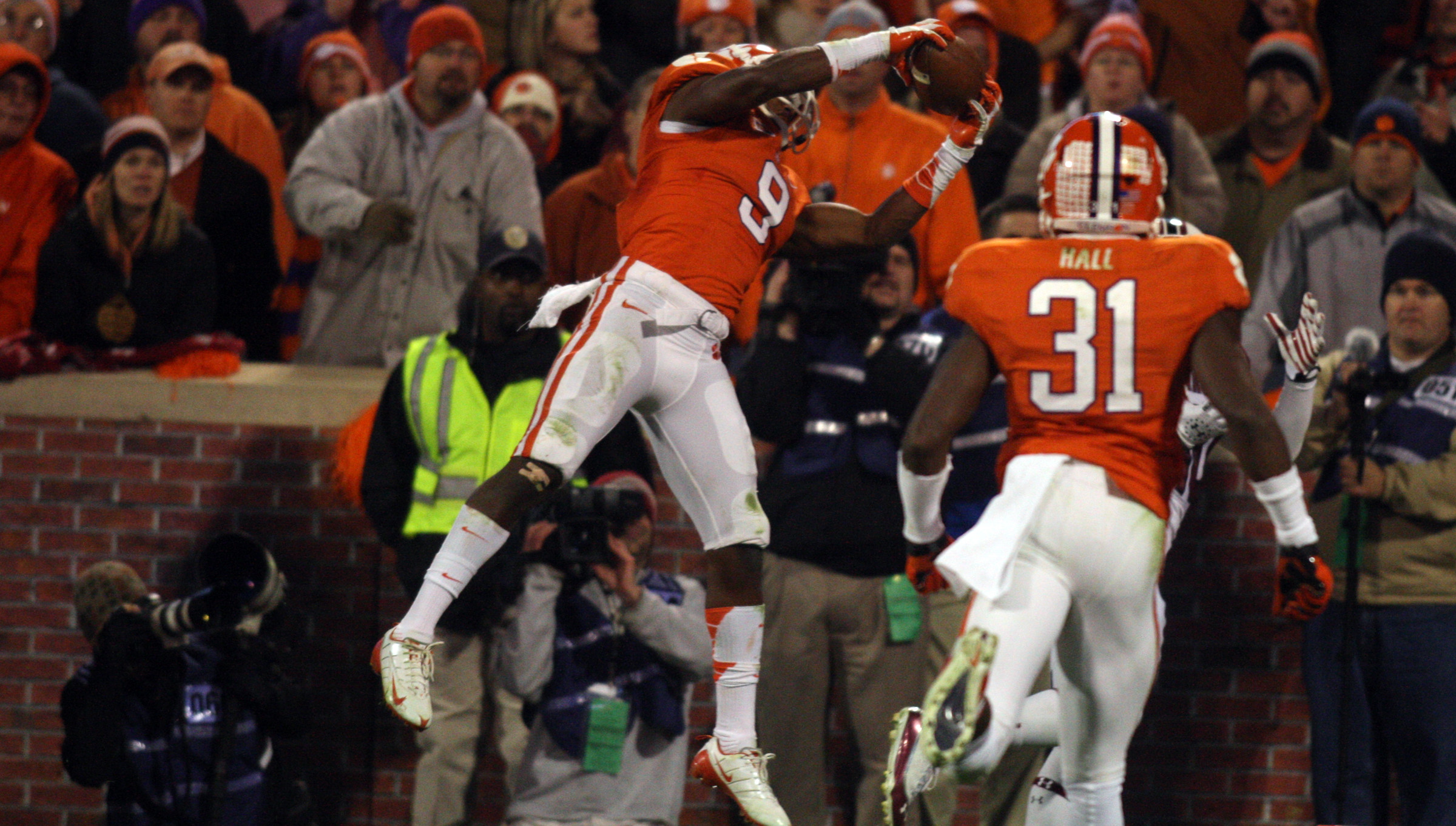 Brewer Named ACC Defensive Back of the Week

GREENSBORO, NC – Duke quarterback Sean Renfree and receiver Jamison Crowder headline a list of eight players named as the Atlantic Coast Conference Football Players of the Week, announced by the conference on Monday. Renfree completed 36 passes for 432 yards and four touchdowns and Crowder had 203 receiving yards and two scores, including an ACC-record 99-yard touchdown reception, in Duke’s 52-45 loss to Miami.Miami’s Duke Johnson set new career highs with 176 rushing yards and three touchdowns and is the Rookie of the Week for the fifth time this season.Florida State’s Bjoern Werner, the Defensive Lineman of the Week, tallied 3.5 sacks and recovered a fumble, and Dustin Hopkins, the Co-Specialist of the Week, connected on two field goals of 50 yards or longer in the Seminoles’ 37-26 loss to No. 6 Florida.Virginia’s Steve Greer, the Linebacker of the Week, and Clemson’s Xavier Brewer, the Defensive Back of the Week, posted game highs in tackles in their final collegiate games against in-state rivals.Maryland’s Stefon Diggs totaled 248 all-purpose yards in the Terrapins’45-38 loss to North Carolina and is the Co-Specialist of the Week.

DEFENSIVE BACK – Xavier Brewer, Clemson, R-Senior, DB, 5-11, 190, Jacksonville, Fla.Brewer had the best game of his career on Senior Day against South Carolina with a career-high 12 tackles, including nine individual tackles. He was the leading tackler in the game for either team, three more than any teammate. He also had two tackles for loss, including a sack, an interception and three total passes defended. Brewer became the first Clemson player to record a sack and an interception in the same game since Rashard Hall did it against Boston College in 2009.

OFFENSIVE BACK – Sean Renfree, Duke, R-Senior, QB, 6-5, 225, Scottsdale, Ariz.Renfree completed 36-of-59 passes for 432 yards and four touchdowns in Duke’s 52-45 loss to Miami. The senior quarterback directed the Duke offense that ran 94 plays, posted 30 first downs, totaled 583 yards of total offense, and did not commit a turnover. The 432 yards passing and 428 yards of total offense both marked the eighth-highest single-game total in program history. Renfree matched the Duke record for touchdown passes in a half with four in the second half and set the program single-game mark for pass attempts without an interception. He completed a 99-yard touchdown pass to Jamison Crowder en route to setting single-game career highs for pass attempts and passing yards. RECEIVER – Jamison Crowder, Duke, Sophomore, WR, 5-9, 175, Monroe, N.C.Crowder hauled in eight passes for 203 yards and two touchdowns in Duke’s 52-45 loss to Miami, including a 99-yard score, the longest pass play in the 60 year history of ACC football.. The 203 yards rank as the seventh-highest single-game total in Duke history as the sophomore averaged 25.4 yards per catch. Crowder totaled 272 all-purpose yards in the game and now holds the Duke single-season record for most touchdown receptions of over 50 yards with five this year.DEFENSIVE LINEMAN – Bjoern Werner, Florida State, Junior, DE, 6-4, 255, Berlin, GermanyWerner matched his career high with 3.5 sacks and recovered a fumble in Florida State’s 37-26 loss to No. 6 Florida. He finished the game with six tackles, including four solo stops, while sacking Florida quarterback Jeff Driskel twice in the first and 1.5 more times in the second half. His recovery of a Driskel fumble and 9-yard return set up Florida State’s go-ahead touchdown in the third quarter as the Seminoles rallied from a 13-3 deficit with 17 unanswered points. His play earned him National Defensive Lineman Performer of the Week honors from the College Football Performance Awards. LINEBACKER – Steve Greer, Virginia, Senior, ILB, 6-2, 230, Solon, OhioGreer played the best game of his career in his final college contest. Greer led the Cavalier defense with 19 tackles in a 17-14 loss at Virginia Tech. Greer led both teams in the defensive-oriented game with a career-high 19 tackles, along with nine solo stops. Greer finished the season with 122 total tackles. Virginia held the Hokies to 303 yards of total offense, almost 100 yards below their season average (399.9).

CO-SPECIALIST – Stefon Diggs, Maryland, Freshman, WR/KR, 6-1, 185, Gaithersburg, Md.Diggs, who ranks sixth nationally with 172.3 all-purpose yards per game, turned in his most productive all-around performance of the season in Maryland’s 45-38 loss to North Carolina. The freshman totaled 248 all-purpose yards and made plays in a variety of ways. With 0:21 left in the second quarter, Diggs took a pitch from quarterback Shawn Petty and threw across the field to Matt Furstenburg for an 8-yard touchdown. It was Maryland’s first touchdown pass by a non-quarterback in over two years. Then, to open the third quarter, Diggs took a kickoff 99 yards for a touchdown that gave the Terrapins a 35-21 lead. Diggs had eight receptions for 82 yards and 20 rushing yards on three attempts. He ranks ninth on Maryland’s single-season receiving yards list with 848 and second on Maryland’s single-season all-purpose yards list with 1,896, trailing only Torrey Smith (2,192 in 2009).CO-SPECIALIST – Dustin Hopkins, Florida State, Senior, K, 6-2, 190, Houston, TexasHopkins continued his memorable senior season with another career first against Florida – connecting on two field goals of 50 yards or longer in the same game. The Houston, Texas, native closed out the first half with a 50-yard field goal on the final play to get the Seminoles on the scoreboard after falling behind 13-0. He then added 53-yard field goal to Florida State’s run of 17 unanswered points in the third quarter as the Seminoles built a 20-13 lead. Hopkins was named National Placekicker of the Week by the College Football Performance Awards. He is the first FSU player to kick two field goals of 50 yards or longer in the same game since Derek Schmidt in 1985. Hopkins is now 9-of-14 all-time from 50 yards or longer with his total field goals from that range ranking second among active kickers. With 87 career field goals, Hopkins now shares the NCAA FBS all-time lead with Georgia’s Billy Bennett. Already the all-time NCAA FBS leader in kick scoring, he pushed his all-time point total to 456 points. He currently ranks third all-time in FBS All-Player Scoring, trailing only Montee Ball (476 points) and Travis Prentice (468).ROOKIE – Duke Johnson, Miami, Freshman, RB, 5-9, 188, Miami, Fla.Johnson rushed for a career-high 176 yards and a career-best three touchdowns in Miami’s 52-45 win at Duke in the season finale. Included in his three rushing touchdowns was a 65-yard score, his 11th play of over 50 yards in 2012. He finished with 277 all-purpose yards, his sixth game with 200-plus all-purpose yards this season. In the process, Johnson broke Miami’s single-season rushing record held by Clinton Portis (838 in 1999). His 2,070 all-purpose yards are the most by a Miami freshman and second-most in program history (2,108 by Willis McGahee in 2002). Johnson had four 100-yard rushing games this season, and finished his rookie campaign with 957 rushing yards and 10 scores on 139 carries. He also finished 2012 with a single-season school-record 892 kick return yards and two touchdowns. Johnson’s 13 touchdowns on the season are tied for the fifth-most in program history.