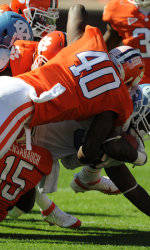 This is the second straight year a Clemson defensive end has been named an All-American by the Walter Camp Foundation. Da’Quan Bowers was a first-team selection last year.

Branch was also a first-team All-ACC selection this year and has an ACC best 10.5 sacks and 16 tackles for loss entering the bowl season. He has 78 total tackles, second on the Clemson team. He had four sacks and six tackles for loss in Clemson’s win at Virginia Tech on October 1, tying the Clemson single game record for both categories.